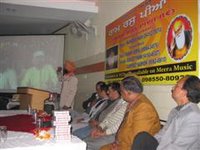 “Ram Ras Piyaa Re” Gurbani VCD Released at Hotel Jai Villas.
The Excellent VCD has been produced by VISION MUSIC SIRSA & recorded at Ocean Studio Sirsa by Mr Murari Verma. The marketing of the VCD is to be done by MEERA MUSIC Co. Patiala.
Posted by GS Mann at 2:51 AM No comments: 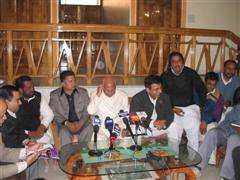 Charity Begins at home, so does Discipline!

As we are observing ‘Road Safety Week’ this week, here are some vital points I’ll like to apprise you about.

Merely observing ‘Road Safety Week’ every year is not bringing the required changes. It is requested that first of all, the adherence to traffic rules and its education should begin from drivers of Government Vehicles as well the officials who are using these vehicles. As The Government and police vehicles are example to the public

It is a commonplace scene that a large no. of Govt. vehicles invariably break the traffic rules, They park their vehicles in the right hand lane at railway crossings. These include vehicles of the POLICE as well. Most of the time the red roof light beacons, hooter, sirens are used in place of horns even if the designated officer is not in the car/jeep. At times even if the concerned official is in the vehicle the hooters are used without justification as if the officer is going on some big pursuit while in reality he is getting the traffic cleared just to reach home or some Public/Political function, which in no terms is any kind of emergency.
It is requested that these kinds of irregularities should be checked with immediate effect. Haryana claims to be entering the IT era, wonder with this kind of insensitivities from the people who run the administration where we are leading?

We expect the same from most of our respected politicians but given the kind of education and the political environment (sparing few exceptions!), this is going to be a distant dream. But our educated Officers and their subordinates can definitely put up a better show.

Suggestions:
1. Merely observing a ‘Road Safety Week’ is just not adequate, it’s should be a continuing effort on part of Government machinery to educate it self as well as the masses through out the year.
2. Good illustrated trilingual traffic rules booklet should be published in Hindi English & Punjabi.
3. These should be handed out free or at cost price with every pollution certificate, with every traffic offence Challan. And with every new driving license and insurance policy.
4. The practice of blackening of half of the head light glass should be abandoned, as India now manufactures world class motor vehicles with most modern lighting system. This was useful in very old times when only single filament lamps were fitted in Motor cars, even then the provision was to make a bulls eye in the center of the headlight.
5. People should be taught the proper use of Hi Beam & Lo Beam. Ever wonder what the Use dipper means. As being sometimes advertised by the administration and RTOs. There is no item by the name of dipper on motor vehicles.
6. The berms of the roads are often stocked with heaps of construction materials for months together, a very dangerous situation created by contactors and PWD B&R. They should be booked for causing risk to life of road users.
7. Often right turn signal blinker is used by heavy vehicles to signal pass. Which at times can be misleading. They should be advised, to use right blinker signal for purposes of right turn only.
8. Driving license should not be issued without a proper test by competent authority, the authority its self be also put to test from time to time.
9. Trolleys of tractors should be fixed with reflectors/reflecting tapes at the rear as they do not have any electrical connection and cannot be fitted with rear lights. Other vehicles don’t need this as they have in built reflectors, but the over enthusiastic High police is some to forcing car users also to put on these reflecting tapes. Instead the vehicles with taillights should be checked if these lights are functional or not.
10. The Government drivers and officials should be given refresher courses of safe and gentle driving from time to time; they should never be allowed to have a feeling that they are the privileged users of the roads.
11. The Administration is rightly warning the guardians and the underage drivers of stern action. Even in most advanced countries where roads are much more safer the under aged can just not drive or ride.

Appendix1 Additional Suggestions (to the previous suggestions)
Although MV Act has got so many laws and bylaws for road users, some more points that need to be highlighted and may be on some of these, the MV act is silent. These are mentioned below:
1. The road dividers (medians) should not have cuts over a large distance as they also have blinds fixed on these. Sudden appearance of a vehicle from so many cuts over a small distance causes accidents and renders the use of dividers futile.
2. There is a need for developing Traffic Park in SIRSA and at other district head quarters,
3. For the subdivisions there can be multimedia Kiosks (booths) having CBT Consoles (Computer Based Training) using specially developed interactive driving simulation software (driver training suits), this will be a cheaper alternate to Costly Traffic parks that also need a lot of land and finances to develop.
4. All old Chowks are of very high profiled (high height) structure and are hindrance in clear view of the intentions of the traffic coming form other sides. Technically they should be round-abouts of very low profiles (Lo Height), so that even a car user who is usually seated very close to the ground level get a view on the other side; thus be able to judge the intentions of the traffic across the chowk.
5. However the older Chowks cannot be changed as they are attached to religious or political sentiments, but all new Chowks must be made taking care of practically usefulness rather than for appeasement.
6. Pressure Horns and high decibel horns are not allowed by law they should be physically removed from all the vehicles found to be fitted with these, unfortunately here also the State Roadways fleets and Private Bus Operators sanctioned by the RTO boasts of maximum usage of these Pressure Horns causing enormous Noise Pollution and add lot of plight to the nerves of road users.
7. Law requires a Non Polluting Vehicle certificate, that’s OK but who will look into the fact that most of the Gasoline [Petrol] and Diesoline [Diesel] supplied is highly adulterated and is of low quality; a chief cause of Impermissible Emission levels even from new vehicles.
8. The Government is also unclear about the film laws, internationally the front wind shield, the window panes of the driver and co-driver have to be crystal clear, no sticker or any thing that obstructs vision can be pasted on it. But all our stickers viz. Pollution Under Control, special privilege stickers like the Big Rectangle for permitting usage of red roof light, the Big Green Sticker for the permission of black film permit find place only on the front wind shield, causing hindrance to the vision. Are drivers of the privileged vehicles trained in such a way that they can drive well even in obstructive view?
9. Another grave hazard on Indian roads is of the stray cattle; perhaps nothing can be done about it.
10. Mobile phone usage while driving is very dangerous, only those mobile sets that have hands free operation may be allowed.
11. Seat belts and helmets save life it should be responsibility of citizens to use these to make them safer; mostly people wear it just to evade a Challan.
12. Education about rules of road should be mandatory in the school syllabi.

There is need for numerous reforms these are just a few to initiate the change.

January 1, 2006
The eve of New Year was celebrated with great fun and joy. Different hotles and restaurants for over booked and parties were attended by youth, as well not so young couples as well young teenagers. Sirsa gave a look of a metro city with all the hip people out there to welcome the New Year. Fireworks were burst when the clock struck advent of New Year.

The monthly meeting of LokPanchayat (a regd. NGO) was held at village Kuttabadh. Discussions were made regarding the arrangements for the Annual General meeting to be held on Ottu Headworks on Feb 01, 2006. Lokpanchayat will also co-host the meeting of Ottu Jheel Nirman Sangrash Samiti Meeting on the same day i.e. Feb 01 on the same venue.

January 4, 2006
Nagar Kirtan on the eve of Gurpurab of Guru Gobind Singh ji was taken in Sirsa City. Panj piaras decorated in traditional wear escorted the Nagar Kirtan, which had a large following despite a very cold winter day.
January 5, 2006
Gurpurab was celebrated in the Gurdwara Patshahi 10th today. Guru Ka langar was distributed all day long. Kirtan by Ragi Jathas was recited till late in the evening. There will be another Kirtan session in the same Gurdwara at nighttime. In the morning time devotees kept pouring in all day from near by as well as far off villages and form the City itself.
City residents of Sirsa mostly attended the night session.
Posted by GS Mann at 4:27 AM No comments: