S Parkash Singh Badal Ex CM Punjab in Sirsa.
SIRSA NEWS
( www.SirsaNews.com )
20 January 2019
Pictures and Videos: GS Mann, Amar Singh Jyani, Surender Sawant, Mukhtiar Singh Happy, Vikram Bhatia. Vikas Taneja
S Prakash Singh Badal Former CM of Punjab was in SIRSA today. Sardar Badal Came to Sirsa to attend a wedding, after that he also called upon Sh Veerbhan Mehta in B-Block. Mr Badal did not comment on the party’s stance in Haryana but admitted that the relation with BJP is very very old and very strong. He said that only Mr Sukhbir Badal will be able to comment upon everything once the General elections are announced.


The Judgement Order Part relevant to Dera Cheif only is as below
Excerpt from Judgement CBI Versus Baba Gurmeet Ram Rahim and others The Life Imprisonment awarded on 17.1.2019 shall begin after the expiry of first sentence (10+10=20)
15. Section 427 (1) Cr.P.C. provides that the date of expiry of first sentence that the offender undergoes shall be the starting point of subsequent sentence and without court’s discretion being exercised, the subsequent sentence will not run concurrently. Thus, normally rule of Section 427 (1) of Cr.P.C. is that when sentences are awarded to a convict in two different offences, one after the other, the sentence awarded to the convict on subsequent conviction shall commence after the expiration of the imprisonment to which he has been previously sentenced, unless the court directs that subsequent sentence shall run concurrently with his previous sentence. No doubt, the discretion vesting with the court is to be exercised judiciously. In the instant case, convict-Gurmeet Ram Rahim is admittedly undergoing term sentence of imprisonment for committing offences of rape and said accused/convict has also been held guilty and awarded life imprisonment for committing offence punishable u/s 120-B
IPC read with Section 302 IPC, meaning thereby that the acts of accused/convict are abhorrent and two distinct and grave crimes have been committed by the convict at different points of time and therefore, it is not a case where discretion is required to be exercised in terms of Section 427 (1) of Cr.P.C.. Resultantly, life imprisonment awarded to the said convict shall commence at the expiration of term sentence awarded in earlier case i.e. in RC No. 05/2002.
16. Let conviction warrants be prepared accordingly.

Special Judge Jagdeep Singh also imposed a fine of Rs 50,000 each on all the four accused.

Ram Rahim and other three accused - Kuldeep Singh, Nirmal Singh and Krishan Lal - were  present in the court through video conferencing from Rohtak jail and Ambala jail, respectively.

It was Kuldeep Singh who had shot at Chhatrapati outside his house in Sirsa on the evening of October 24, 2002. Chhatrapati later succumbed to his injuries on November 21, 2002, at Apollo Hospital, New Delhi.

Kuldeep Singh had come along with Nirmal Singh on a scooter.

Nirmal Singh had managed to flee on scooter but the police nabbed Kuldeep Singh on the spot. They revealed the name of Dera manager Krishan Lal who had provided his revolver to them.

The Punjab and Haryana High Court had handed over the case to CBI on a petition by Anshul Chhatrapati, son of Ram Chander Chhatrapati, on November 10, 2003.

According to CBI, Ram Chander Chhatrapati was killed as Dera chief Gurmeet Ram Rahim was upset over news items in 'Poora Sach' newspaper, which he was running. In May,2002, Chhatrapati published a news item about the anonymous complaint of a Sadhvi regarding sexual exploitation of Sadhvis in Dera Sacha Sauda in the newspaper. From there onwards, he started receiving threats.

Former driver of Ram Rahim, Khatta Singh, had told the court that it was Dera chief who had ordered Chhatrapati's killing in front of him.

He told that on October 23, 2002, 'Poora Sach' had published a news item regarding the case of sexual exploitation of women followers. After reading the article, Ram Rahim got angry and told accused Krishan Lal, Kuldeep Singh and Nirmal Singh to eliminate Chattrapati by any means. On hearing this, accused Krishan Lal went out of the cave of Gurmeet Ram Rahim Singh and came back with his own revolver which he gave to Kuldeep Singh and Nirmal Singh.

The CBI Special Court had earlier sentenced Ram Rahim for 20-year rigorous imprisonment (RI) on August 28, 2017, in a case of rape of two women followers. He had also been facing Ranjit Singh murder case before the same court where he is an accused along with Krishan Lal, Jasbir, Indersen, Avtaar and Sabdil. Ranjit Singh was murdered on July 10, 2002. The CBI has alleged that Ram Rahim suspected him to be behind the circulation of anonymous letter of a sadhvi alleging sexual exploitation of sadhvis at Dera.
Posted by GS Mann at 5:34 PM No comments: 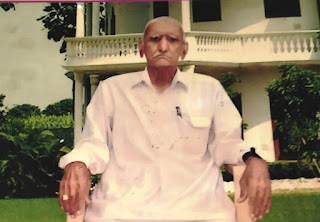 Amar Singh Jyani is a staffer with India News Haryana and is an Ex-Air Force Personnel. He is also a regular contributor to the newsfeed of SirsaNews.


Sirsa News sends condolences on this loss to Amar Singh Jyani and his family.


Also, read related:
http://sirsanews.blogspot.com/2019/01/chattarpati-murder-case-dera-chief-held.html
Posted by GS Mann at 7:44 AM No comments: 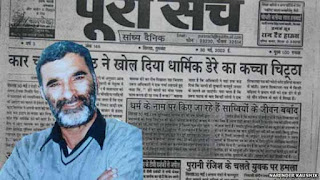 
Ten Points to know about this case
1. On October 24, 2002, journalist Ram Chander Chhatrapati was allegedly shot at in Sirsa by two carpenters who were Dera followers. Chhatrapati died in November, after being treated at a hospital for few days.

2. Chhatrapati had written extensively about the growth of Dera into a powerful empire using wrong methods.
3. He had published an anonymous letter in his evening-daily 'Poora Sach' that highlighted the plight of women sexually abused by the Dera chief after which he was killed.

4. A former driver of Ram Rahim, Khatta Singh had earlier told that the sect chief had ordered the killing of the journalist.

5. The CBI filed a charge sheet in the murder case in July 2007. The driver was one of the most important witnesses of CBI.

6. The 51-year-old self-styled godman is currently serving a 20-year jail term in Sunaria jail at Rohtak for raping two of his women disciples.

7. Incidents of widespread violence were reported in Panchkula and Sirsa in August 2017 when the Dera chief was convicted in the rape case. More than 40 people were killed and over 200 injured.
8. With tightened security, Panchkula district is on high alert today. Additional troops have been deployed to maintain the law and order situation.

9. Around 500 police personnel have been deployed around the premises of the court.

10. The special CBI court on Tuesday gave consent to Haryana government plea to allow Rahim Singh to appear for the verdict through video conferencing.

Ramchander Chhatrapati was shot at in October 2002 after his newspaper, Poora Sach, published an anonymous letter that narrated how women were being sexually exploited by Gurmeet Ram Rahim at the Dera headquarters in Sirsa.

The journalist later succumbed to injuries, following which a case was registered in 2003.