The Guiding Light: T.S. Mann, on his Seventeenth Barsi 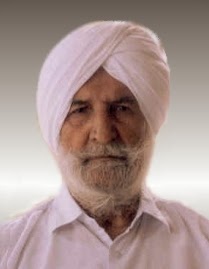 The Guiding Light: T.S. Mann, on his Seventeenth 'Barsi'
SIRSA NEWS
19 August 2020
On The Seventeenth Death Anniversary of Sr. TS Mann, SIRSA NEWS brings you a brief life sketch of Sr. Mann, the guiding light and inspiration that drives this Web Site. Watch Embedded VIDEO Also
Late Sardar Tirlok Singh Mann (HPS- I Retd. Supdt. Jail)
Sardar Tirlok Singh Mann was born at Village Mannawala Distt. Shekhupura. (Now in Punjab of Pakistan) on 20th July 1920 in the famous Mannawala Family (A chapter is devoted to Mannawala Family, in the book The Chiefs of Punjab, by a British Author. A family tree from 1700AD up to the name of Sr T.S. Mann (Link to Family Tree) also exists in this book as well as the Gazette of Punjab)He was the eldest son of S. Sahib Singh Mann (Ex MLC of Punjab Assembly 1952) His education started from Guru Nanak Khalsa High School Nanakana Sahib. He did his Graduation in 1942 from Khalsa College Amritsar. Six feet tall and well built; he was a good athlete & sportsman. He won the Punjab University’s ‘One Mile’ race twice. At that time the Punjab University was the biggest university in North India and was located at Lahore. Even then he represented the Punjab University’s Volleyball team. 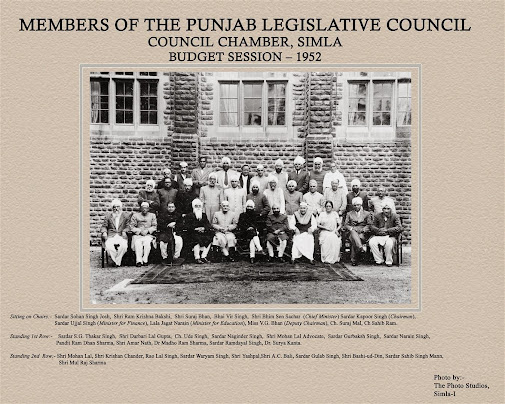 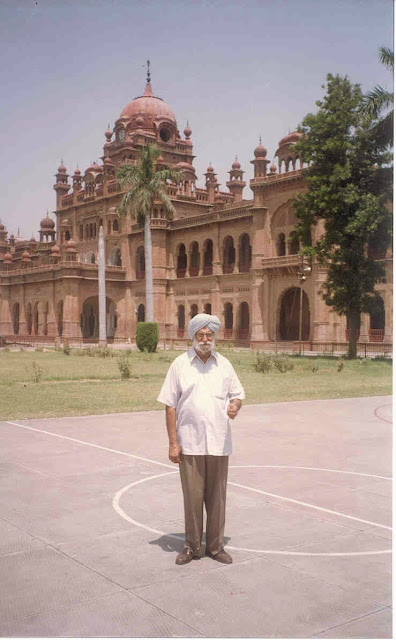 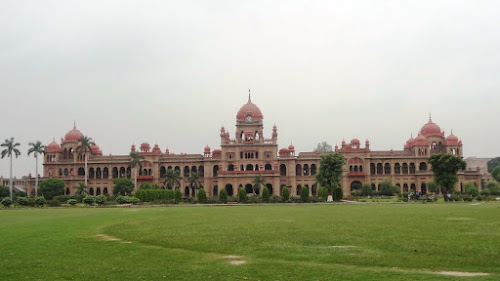 Picture of Khalsa College Amritsar: GS Mann August 2018
(Conferred-with-heritage-status-by-the-UGC)
British Professors taught English at Khalsa College at that time. He had good command over English, Punjabi, Urdu, Hindi, Persian and even some basic working knowledge of French. He visited Sri Harmandir Sahib every morning during all 4 years (It's used to be 4 years in college after 10th; 1 year FA/F.Sc. followed by 3 years of graduation) of his hostel life at Khalsa College Amritsar He held his teachers and professors in very high esteem. Prof Sahib Singh, who is known for the most authenticated 'TIKA' of Sri Guru Granth Sahib was one of his favourite professors.
In 1943, he joined the Jail department by appointment through Punjab Services Commission. His first posting was probably at Multan Jail as Asstt. Supdt. Jail. At time of partition in 1947, the family was allotted land at Sirsa; he was made a camp commandant for some time to take care of partition refugees at SIRSA. He resumed his jail department post in post-partition India. During his service in the Jail Department, he did not distance himself from the prisoners, rather he understood their psychology and interacted with them to resolve their problems as and when these surfaced. He was very particular about the ration and good hygienic food of the Jail prisoners and daily ensured that the right quantity and rightly cooked food was served on time. He also took care of the welfare possibilities of all the prisoners. He was very popular with the inmates and many of them used to thank him on and after completion of their jail terms. Besides many jails of Punjab & Haryana, he was also posted at Tihar Jail Delhi in the early fifties.
TV Shots from AajTak telecast of 2003 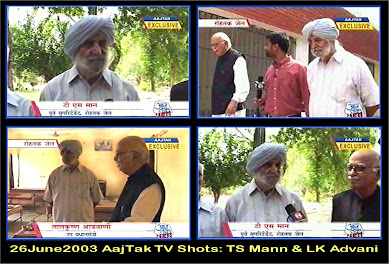 All pictures can be clicked to enlarge or right-click to open link in new window
Watch Video: Sh LK Advani Deputy Prime Minister of India & TS Mann Retired Superintendent Jail Revisit Rohtak Jail on 26th June 2003 - On This Date Emergency was declared in India in 1975. This Video anchored by Deepak Chaurasia was recorded on 26th June 2003 at Rohtak Jail.
In 1975 to 1977 during the national emergency, he was Superintendent of Rohtak Jail. Many senior political leaders were detained in Rohtak jail under his tenure. {To name a few: Sh Bhairon Singh Shekhawat Ex. Vice president of India, Sh LK Advani Ex. Deputy Prime Minister of India, Sh Chander Shekhar Ex-PM of India, Ch. Devi Lal Ex DPM India (and Ex CM Haryana), Sh. Sikander Bakht Ex-Governor of KERALA, Dr Bhai Mahavir Governor of MP. Sh. Pillo Modi MP, Sh Ashok Mehta MP, Samar Guha, Sh Biju Patnaik Ex-CM Orissa, Major Jaipal, Bakshi Jagdev and many more…………} All of these were satisfied with the humane behaviour of Sr. TS Mann. Many of them called upon him personally at his official residence soon after attaining political posts and ministries in The Janta Party in 1977. Even today many of them remember him fondly. He was being offered a seat for becoming an MP in the elections of 1977, but he refused as he was a non-Political person and never took any advantage of his such closeness to these leaders. May it be recalled that in 1977 elections it was a landslide victory for the JANTA PARTY, and anyone who was nominated by Janta Party was sure to win. After a gap of 28 years, Sh. LK Advani DPM of India recalled him at Rohtak jail on 26 June 2003. An exclusive video film on LK Advani and TS Mann was produced by AajTak news channel in Rohtak Jail; it was telecast at prime time on 26 June 2003 under ‘VISHESH’ Sh Advani specifically mentioned in this telecast the good treatment he got from Mr. Mann during detention under MISA. [see Pictures above] After 35 years of meritorious service he retired in 1979 as Supdt. Distt. Jail Rohtak, at that time this was the second senior-most post in the Jail Deptt. The Govt. gave him four increments for his honest & dedicated services. He had ample regards for his officer: I.G. Prisons, Late Sh. SK Puri. That’s why he refused a promotion to the rank of The IG (the Highest Post of Jail Deptt. In those days) during the last few months of his service, as this would have put the then IG Mr Puri in trouble, and would have jinxed the last phase of service (career) of Sh. Puri, due to certain political reasons.
He took up farming at his farm at village Kirpal Patti, in Ellenabad Sub Division of District SIRSA after retirement. He did co-operative farming by indulging 20 families with him. He made sure that the basic needs of these families (Housing, food and clothing) were fulfilled. He arranged money for them also. He discouraged these families to consume alcohol or any kind of intoxicants. He imparted moral and social teachings to all the people associated with him. He himself was a teetotaller and vegetarian throughout his life. Along with farming, he took up many social projects. I integrated his agriculture wisdom and scores of his farming tips even now in pursuing modern farming. From 1994, he gave new momentum to the already Established ‘LOK PANCHAYAT’ (A regd. body) in the Rania-Ellenabad Jeevan Nagar area of SIRSA. Lokpanchayat is a non-religious, non-political, non-factional, social body. [NGO]
During the unfortunate era of militancy in Punjab, Sirsa a border district was also affected, Sardar TS Mann with others formed a peace committee in Sirsa, Sh V. Kamraj an able IPS officer who was posted in Sirsa in those days appreciated the efforts of the peace committee.
In 2001 he had joined the move initiated from the Districts of Karnal & Kurukshetra, for the formation of separate SGPC for Haryana (now known as HSGPC: Haryana Sikh Gurdwara Parbandhak Committee Adhoc). He motivated and apprised people of Sirsa district about the necessity of separate SGPC for Haryana. With his foresight, the idea that was instilled in the minds of the crusaders of HSGPC kept the demand for HSGPC alive & the efforts continued long after his death. Sikh population and Sikh leaders of Haryana kept on pressing for this demand. Efforts of Dr Ashok Tanwar and Avantika Tanwar in persuading the rightful demand of Separate Gurdwara Committee finally bore results; a bill for Separate Gurdwara Committee was presented in the Haryana Assembly and the same was passed. The separate body for the management of Sikh Gurdwaras has been hence formed by an act of Haryana Govt in the recent assembly session in July 2014 to which Governor Haryana gave an assent. However, the matter is now sub-judice in the honourable Supreme Court of India.
He was eldest amongst three Sons of Sardar Sahib Singh Mann. Youngest was Sardar Amarjeet Singh Mann, Ex-Sarpanch (Born 1927 Died 1987), his family is settled in Village Moujukhera. Sardar Gurdeep Singh Mann (Born 1921 Died 2014), he was younger to Sardar TS  Mann, his family is settled in Village Patti Kirpal. Both were Progressive Farmers and well-known personalities of this area.

Sardar TS Mann was a stern follower of the teachings of Guru Granth Sahib. He always cherished his parents.
In 1986, the untimely demise of his elder son: Sh. Gurinder Mann perturbed him for a while but he took this great loss as the will of The Almighty and consoled rest of the family. It is worth mentioning here that Sh. Gurinder Mann was highly educated [M.A. LL.B. BJ, F.I.P.M.] He was a highly talented budding photo-journalist and art photographer whose pictures were published in international journals. Gurinder Mann was a keen musician and a talented painter as well. 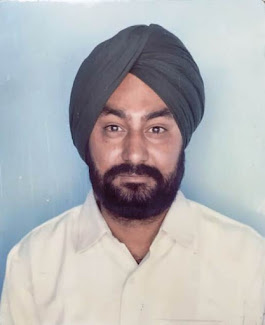 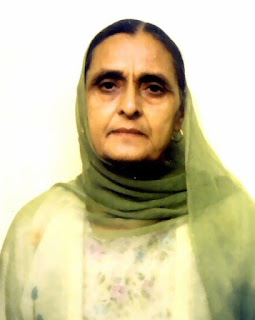 Late Sardarni Harpal Kaur Mann (1932 - 2009),
wife of Sardar TS Mann, pious & progressive force that stood by TS Mann.
Sardar T.S. Mann’s life was highly disciplined and he was highly health-conscious. Even at the age of 83 years, he took long walks daily and visited his fields daily. He never needed much medical care throughout his life, as he believed that nature takes care of petty ailments. He was a die-hard optimist. Sardar Tirlok Singh Mann passed away on the 19th day of August 2003, peacefully.
He is remembered for his principled life, honesty, integrity, philanthropic, and outspoken nature.
Posted by GS Mann at 9:31 AM No comments: