Weekly Iron Supplement Program (WIFS) to be Re-launched in Sirsa 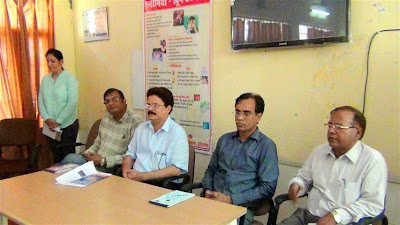 It is estimated that more than 5 Crores adolescents are anaemic in India.
According to NFHS -III data, over 55 % of adolescent boys and girls in the age group of 15-19 years are anaemic. Adolescent girls in particular are more vulnerable to anaemia due to the rapid growth of the body and loss of blood during menstruation. According to NFHS-III, almost 56% of adolescent girls aged 15-19 years suffer from some form of anaemia. Of these, 39% are mildly anaemic while 15% and 2% suffer from moderate and severe anaemia respectively.  In India, the highest prevalence of anaemia is reported between the ages 12-13 years, which also coincides with the average age of menarche. With increase in age, the prevalence of anaemia among girls remains almost stagnant, while among boys, the prevalence rate reduces.
The reasons for anaemia amongst adolescents are:
- Growth spurt leading to increased demandof Iron  in the body
-  Poor dietary intake of Iron
- Worm infestation and high rate of infection
- Increased loss of Iron due to onset of menstruation (in girls)
Posted by GS Mann at 7:14 PM