Mr. Sameer Dhingra, Head and Incharge of Drug Information Centre DIC (Click here to know about DIC) launched under the aegis of WHO has been invited by The Commonwealth Pharmaceutical Association to present his research paper in the forth coming Common Wealth Pharmaceutical Conference to be held at Kuala Lumpur, Malaysia from August 1 to 5.

The theme of the conference is "Quality Care for Better Health" It will encompass major symposiums on Counterfeit Medicines and Communicable Diseases. It may be mentioned here that sub standard quality and counterfeit medicines issues had been major NEWS headlines in India very recently. Other topics and presentations will include the Rational Use of Medicines, New Technology in Drug Delivery, Chronic Disease Management and Medications Reviews.

Mr. Dhingra a Senior Lecturer at the local Lord Shiva College of Pharmacy and a Research Scholar at Guru Jambeshwar University of Science and Technology, Hisar, told Sirsa News that he has also been invited by The University of Sains, Penang city, to deliver a guest lecture on "Recent Trends in Pharmacy Practices in India.

More about Mr. Dhingra’s paper can be read under this post as and when Sirsa NEWS gets the dispatch from Kuala Lumpur. [Here is the dispatch]
Posted by GS Mann at 7:17 AM No comments:

Details sans pictures soon
Posted by GS Mann at 7:34 AM No comments:

Jathedar Vedanti’s positive gesture to Shanti Samiti
July 15, 2007
Sirsa (SIRSA NEWS)
Jathedar Joginder Singh Vedanti, Head Granthi Sri Akal Sahib reciprocated with a positive gesture to Shanti Samiti from Sirsa. The members of the Samiti met him on 14 July, 2007 at Sri Harmandir Sahib, Amritsar. Efforts to resolve the Dera Sacha Sauda-Sikhs row received a major boost when a 25-member delegation “Shanti Samiti, Sirsa” met Jathedar Akal Takht urging him to resolve the issue as early as possible in a peaceful manner. Addressing the NEWS media, Jathedar Vedanti said that he appreciated the efforts and sincerity of the committee and hoped that peace should rule the region soon, he further said had the Dera Chief tendered the apology earnestly such a situation would never had surfaced. Jathedar Vedanti said even now he expected that if a sincere apology is tendered by the Dera Chief, then the situation should ease out and should prove to be in the welfare for both the states of Haryana and Punjab. But it should not again be of the types sent earlier which were either unsigned printed letters from the Dera administration or had a header ‘Press Note’. He clarified that these were not at all Apologies in proper form and factor. He further said that the dear chief should refrain from blasphemous acts not only towards Sikhs but also towards other communities like Hindus. Muslims, Christians etc. He said that this delegation as well we want peace and welfare, but the ball is in the court of Dera Chief. 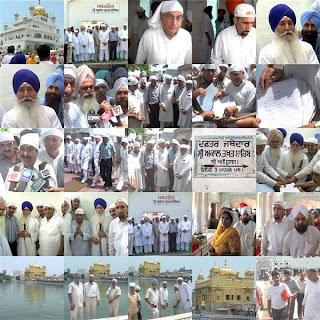 All pictures can be clicked to enlarge or right click to open link in new window enlarged. 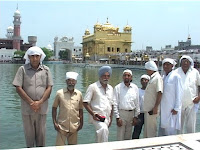 Comrade Swarn Singh informed the press and media that the committee was not representing any single party and was instead here as ambassadors of peace representing the feelings of all the people of the Sirsa region. He said that the peace committee has been formed under the directions of the Deputy Commissioner Sirsa, to negotiate with the agitating Dera followers and the aggrieved Sikhs. He said that signed appeals from thousands of people of Sirsa have been brought to Sri Akal Takht Sahib. Copies of these signed appeals were also taken to Dera Sacha Sauda Chief a couple of days before reaching Sri Akal Takht.

All pictures can be clicked to enlarge or right click to open link in new window enlarged. 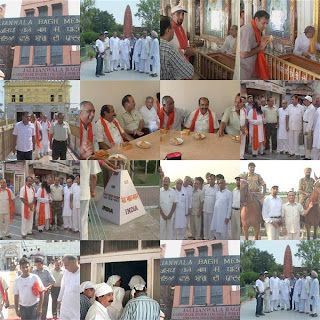 The committee members later visited Jallianwala Bagh & Durgiana Mandir. The committee members also met Mr. Ramesh Sharma and Mr. Surinder Billa of Durgiana Shrine Parbandhak Board. Mr. Billa informd the delegation that Durgiana Mandir is largest Hindu Temple in the city. This temple is devoted to goddess Durga and dates back to 16th century. This famous Hindu Shrine was founded by Lala Nathu Mal Rangwala and Guru Sahai Mal in 1921. There are other temples Durga Mata Mandir, Hanuman Mandir, Bairon Mandir inside the Complex. Shri Ram Nassen of Lahore in 1905 constructed a Sarover. In 1921 a bridge measuring 250 feet in length and 18 feet in width was constructed to reach the major shrine adoring the idols of Shri Laxmi Narayan, Sita and Ram, Radha and Krishna. These idols are beautifully draped and profusely ornamented. All the dignitaries visiting Golden Temple also make a point to visit Durgiana temple.

The committee members also visited Wagah border and witnessed the flag lowering ceremony, better known as the 'Retreat' which is performed everyday, Shortly before sunset, by Border Security Force (BSF) jawans on the Indian side and Pakistan Rangers on the other side.
Posted by GS Mann at 7:11 PM No comments:

Sirsa News remained in hibernation for many weeks, but the E.N.G. process continued nevertheless. All the gap time major news shall be covered with little details but with many pictures under this header.
Posted by GS Mann at 7:08 PM 1 comment: