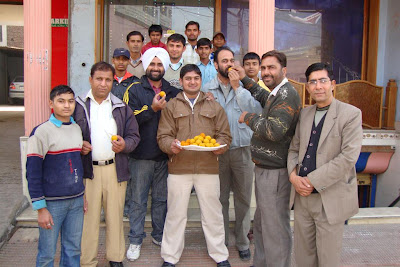 Haryana CM BS Hooda declared Punjabi as 2nd Language and said that Haryana Government has issued the notification of Punjabi as 2nd official language of Haryana. This announcement was hailed by various segments of Punjabi speaking populace of Sirsa as well in rest of Haryana. The Haryana Government has granted second language status to Punjabi in the state, which has a sizable population of Punjabis.

"We have issued notification and accorded second language status to Punjabi...Now, any member (MLA) of the Vidhan Sabha can ask a question in Punjabi," Chief Minister Bhupinder Singh Hooda told reporters in Chandigarh.

The government would make concerted efforts for the promotion of Punjabi language and literature, he promised.

The community with a population about 15 lakhs, has a sizeable presence in Sirsa, Kurukshetra, Karnal, and Gurgaon.

He reiterated his commitment to fulfilling the aspirations of the Sikhs on a separate gurdwara parbandhak committee (HSGPC) in Haryana.
Posted by GS Mann at 8:58 AM No comments:

T 10 Gully Cricket concept, is a hit with the Youth

T 10 Gully Cricket concept, is a hit with the Youth

The recently launched another first time event in Sirsa being organized at JCDV Sirsa, T10 Gully Cricket is a sure shot hit with the youth and cricket fans of Sirsa.

The event which was inaugurated in the middle of Ellenabad By-election din could not be reported on time by Sirsa News. Here are the News Videos related to the T10 matches that shall conclude in February.

Abhay Chautala sworn in as Member of Haryana Assembly 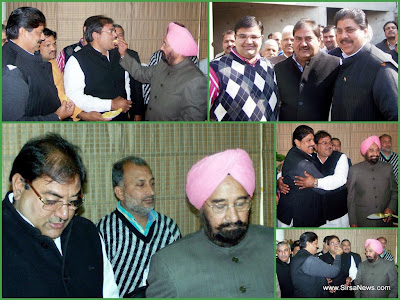 Abhay Chautala takes the oath of confidentiality at

Ch. Abhay Singh Chautala, newly elected MLA from Ellenabad constituency took oath of confidentiality on 27th January at Haryana Vidhan Sabha Chandigarh. He was sworn in as a member of the Haryana Assembly by 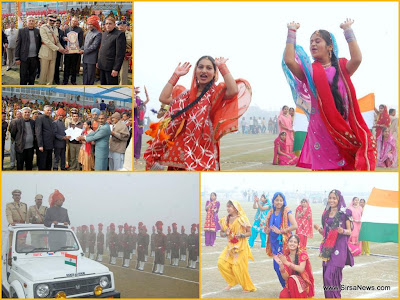 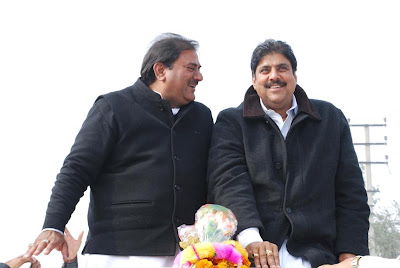 Abhay Singh Chautala won the Ellenabad By-election with a margin of 6227 votes over the Congress candidate Bharat Singh Beniwal. Ch Abhay Singh Chautala younger son of INLD Supremeo and younger brother of Ch Ajay Singh Chautala both MLAs, secured 64813 votes while Bharat Singh Beniwal got 58586 votes. The Third in the lead is Kusum Chaudhary of Smast Bhartiya Party securing mere 1353 votes in a contest that was highly polarized between the INLD and The Congress. All accept INLD and Congress lost their deposits. There is a great wave of joy amongst all ranks and cadre of the INLD over this victory.

Heavy turnout in Ellenabad By Poll

Heavy turnout in Ellenabad By poll.

Braving the biting wintry winds the electorates of the constituency were seen standing in long queues in some of the villages namely: Moujukhera, Nathusari Chopta, Mallekan, Madho Singhana, Bhuratwala, Kuttabadh etc. at around 11AM. Though polling started at a low key in the morning but gradually picked up with the Sun God showering warmth. Till 4PM 65% to 80% polling was recorded in the whole of the constituency. In the Bagri belt comprising of villages: Bhuratwala, Umedpura, Nathusari, Pohraka etc. women were found more enthusiastic in large number. The polling remained mostly peaceful barring isolated incidents of impersonation. Some of the polling stations in Ellenabad villages are said to have recorded even up to 95% of polling. In the evening the total tally of the turn out is reported as nearly 90% while some postal ballots shall add to it.
Posted by GS Mann at 5:45 PM No comments:

With only few hours left to electorate of Ellenabad constituency going to Polls tomorrow morning, with 15 Candidates left in the rink the main Contest seems to be locked between Ch. Abhay Singh Chautala of INLD and Bharat Singh Beniwal of Congress, the third serious campaigner in this election is Kusum Chaudhary of Sarv Bhartiya Party (SBP). The Constituency of Ellenabad had always been a stronghold of the Chautalas, and this time also due to the by-elections, both the parties are leaving nothing to chance and searching and pursuing every nook and corner for voters who seem un-amused. Generally there seems to a clear alienation of voters between INLD and Congress. This is a by-election where ‘INLD seems to be in a better position despite the great efforts put in by the ruling party……But then hastily adds Kyaa Kah Sakte hain election hai….Kuch Bhee Ho Sakta…….Quips just anyone who is asked by media about who is going to be the winner.

List of Contesting Candidates Election to the Legislative Assembly Bye Election from 46-Ellenabad. 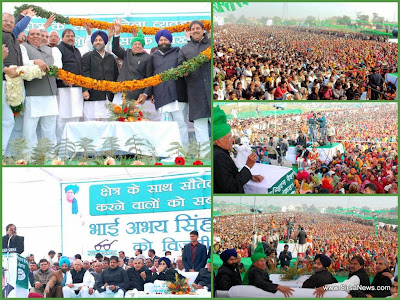 On the last day of campaigning and public meetings, Congress and INLD held different rallies in a bid to show of power. 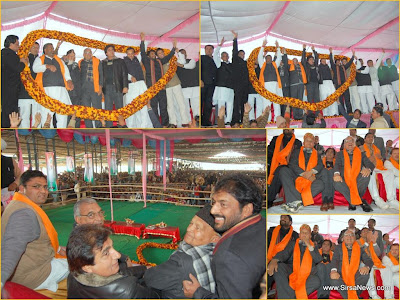 Give a chance to Congress this time- Hooda

On the last day of campaigning and public meetings, Congress and INLD held different rallies in a bid to show their power.

Addressing a largely attended Rally at Anaj Mandi Ellenabad, CM Haryana, Mr. BS Hooda said that Ellenabad had given several opportunities to INLD, yet nothing beyond false promises had been delivered to this Constituency by the INLD. ‘Give a chance to Congress this time to experience the difference.
Raj Babber Addressing Congress Rally 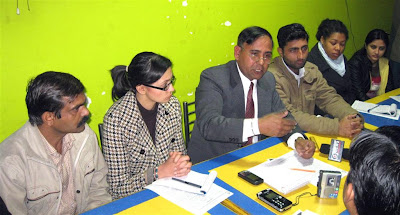 Watch Video in this post; also available as HQ Video on www.youtube.com/sirsanews

Making Ellenabad bye-elections as the take off point by involving political leadership for launching of a pan-India movement for police reforms that democracy deserves, Nishan a Delhi based public policy advocacy & development organisation and Sirsa based youth organisation URJA have garnered the support of all major political parties in fray here for the much awaited restructuring and complete overhauling of police in India. The organisations approached the candidates of the major political parties to convey the aims and objectives of their mission and to their surprise they received all out support, candidates strongly advocated and promised for the much needed structural changes and revamping of Indian Police Service that has failed India and its people time and again.
Video:

It was agreed by the political leadership in principle that “it is the people who perform and not the laws” but what we have been doing is enacting laws to make police more powerful and effective and enacted draconian laws like TADA and POTA and reduced India into a military state for which ultimately people paid the price and still paying for corrupt and completely inefficient police organizational leadership.

They expressed that it is the organizational leadership that is responsible for developing vision for policy formulation to keep the departments performance oriented, whether it is military planning for the defence of country or the police planning for the security of the nation, it is conceived by the organizational leadership that continues with such organizations for 3 to 4 decades and cannot be left to the political governments that are elected for five years.

The police reforms propagated on the intervention of apex court have not changed much on ground for a common man but the corruption and apathy in police functioning continues unashamedly driving hapless people to suicides and living in ignominy in the world’s largest electoral democracy.

The core team that undertook this exercise interacted with media persons here under the leadership of Nishan Director and former BSF officer Aridaman jit Singh. They informed that the joint efforts of Team Nishan and Team URJA shall be directed at making the Indian Police performance oriented, accountable to laws deserved by the democracy to serve and protect its citizens and make it a mass movement across the country. They said it was the New Year resolution of the two organisations to work together and bring other like-mined people under the umbrella of this movement.

Aridamanjit Singh, who is associated with NATO too, told media-persons that his team had been conducting research on Indian Police System for past several years and the crux of its findings was just opposite to the general perception and the claims of the police leadership. He said it was high time that the fashion of blaming the politicians for all the evils and ills of the police is done away with. As the real culprits was Indian Police Service leadership. Instead, it is the Indian Police Service, its imperial legacy, militarised framework and also the archaic police rules that were actually responsible for the rot in the justice dispensation machinery.

Responding to a query, Singh said he was of the opinion that the IPS should be scrapped immediately and a single window recruitment system must be created to replace it. Under the new system everybody who entered the police hierarchy would join police as a constable and must spend at least four years in field.

Melisha Gordon, a former Special Police Officer from and Manisha Singh, an advocate from the same country, who were working on the police reforms project said the need of the hour was to democratise the Indian Police System by distancing it from militarised pattern in demonstration and working ideology.

Speaking on behalf of URJA, Roshan Suchan informed that under the supervision of Aridamanjit Singh, the team comprising of Melisha Gordon and Manisha Singh of Team Nishan and Kavita Jindal,Surjeet Nehra and Vikrant Singh Rathi interacted with Congress Candidate Bharat Singh, INLD candidate Abhay Singh and Samasta Bharatiya Party candidate Kusum Chaudhary. The aim of the exercise was to apprise them of the ideas of the movement and to seek their opinion on this matter. All of them have conveyed their willingness to support this cause wholeheartedly. He said as a newly formed organisation of creative and dedicated youths, URJA would support the efforts of Nishan to spearhead the movement for democratisation of Indian Police System.

The NGO can be reached through following web links:

Watch Abhay Singh Chautala's Video below; This Video Also available on www.Youtube.com/sirsanews
Posted by GS Mann at 8:32 PM No comments:

Also you may Visit www.youtube.com/sirsanews for full screen HD Video of this NEWS