Next updates on Sunday…..Till than Watch Old and New Youtube Videos of SirsaNews.com,

Watch All Video on www.youtube.com/sirsanews or Click here for Veerbhan Mehta's Nomination Video 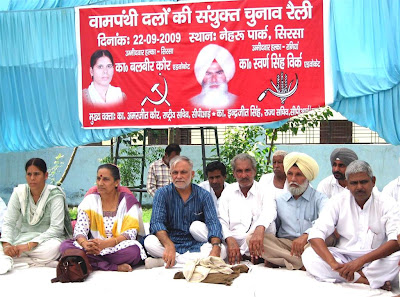 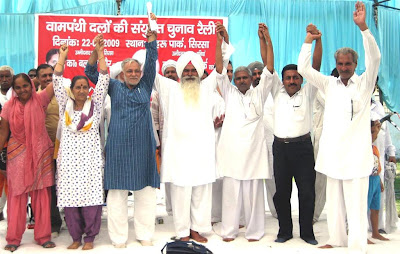 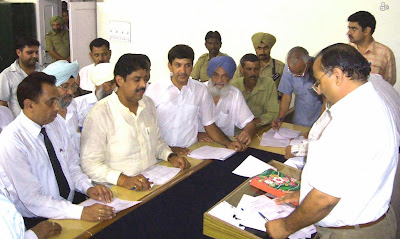 INLD General Secretary Ajay Singh Chautala filed nomination from DABWALI today in the morning. Congress yet to decide a candidate for DABWALI and other seats.
Posted by GS Mann at 6:52 PM No comments:

INLD Candidate Padam Jain Inaugurates his election Office in local Bhadra Bazar Sirsa today in the morning and ther after his supporters conducted a road show in the main markets and streets of Sirsa City. Addressing a press conference later at hotel Arvin, Mr. Padam Jain said that inflation will teach Congress a bitter lesson in the Vidhan Sabha Elections.

Releasing the INLD’s election manifesto to press and media, Mr. Jain said that the harping by CM Haryana, Mr. BS Hooda, through advertisement campaigns ‘No. 1 Haryana’ is a big hoax, which cannot lure electorate of Haryana into committing the same mistake of voting the Congress to power again; they are repenting the mistake they did some 5 years ago. The state had been reeling under drought and power shortage the crime graph has reached newer peaks, inflation has reached at a point where it is unbearable even to buy commodities and articles of daily use.

Mr. Jain said that if INLD forms the next Government it will take care of unemployment, inflation and other such problems that are crippling the state. Commenting on his independent rival, Padam Jain said that independents don’t hold any future in changed political scenario and the voters don’t take them seriously.
Posted by GS Mann at 7:02 PM No comments:

Deputy Commissioner Sirsa, Mr. Yudhbir Singh Khyalia while taking to SirsaNews informed that the administration is fully prepared for the upcoming Vidhan Sabha elections, the officials who are to perform elections duties are being imparted on hands training with EVMs and other procedures of conducting elections, the modal code of conduct has been briefed to all parties.
Watch Video:

Meanwhile a formal notification to hold the Assembly elections was issued today and the prospective candidates will be able to file their nomination papers up to September 25. There will be no filing of nominations on September 20 and 21 being Sunday and Id Holiday, However, papers could be presented to the returning officers on September 19 and 23 as these are not public holidays. All ROs and AROs would remain in office between 11 am and 3 pm from September 18 to 25. The scrutiny of papers will take place on September 26, withdrawals up to September 29, except September 27 and 28. Polling would be held on October 13 between 7 am and 5 pm and the votes would be counted on October 22. The election process will conclude on October 25.

Congress still undecided on allotment of tickets, more than 100 aspirants for 5 Vidhan Sabha seats of Sirsa

Congress still undecided on allotment of tickets, more than 100 aspirants for 5 Vidhan Sabha seats of Sirsa due to hopes of windfall victory to Congress
SIRSA NEWS ( www.SirsaNews.com )
14 September, 2009
All pictures can be clicked to enlarge or right click to open link in new window. Pictures: Amit Soni Videos: Nakul Jasuja.
Kuldeep Nanda, general secretary of the Punjab Pradesh Congress Committee, and Pawan Godara, president of the Rajasthan Youth Congress, the two observers of the AICC for Sirsa, had to face a tough time today in the local Congress Bhawan when a large number of supporters of the 106 aspirants for the Congress ticket from five Assembly seats of the district laid a virtual siege, occupying almost every inch of the building and the surrounding areas.
While most of aspirants appeared before the observers in person, many others sent their bio-data through their supporters.
Interestingly, veteran Congress leader and Haryana Minister for Industries, Commerce, Mines and Geology, who has been in a dilemma over contesting himself or fielding his daughter Sunita Setia, did not apply for the ticket.
However, an application on behalf of Sunita Setia, chairperson of the Improvement Trust, was submitted to the observers.
District Congress president Hoshiari Lal Sharma, Block Congress president Bhupesh Mehta and Anand Biyani are among the 15 aspirants who have submitted their bio-data for the Sirsa Assembly seat.
Gurjeet Singh Kaura, a senior Punjab and Haryana High Court lawyer, Bharat Singh Beniwal, a member of the dissolved Assembly from Darba Kalan, and Malkiat Singh Khosa are among the 20 aspirants who have sought the ticket from Ellenabad.
Kalanwali (reserved) attracted the maximum 41 aspirants, including former MP Mani Ram Keharwala, IYC secretary Naresh Kalia and Pushpa Nagra.
Ranjit Singh, deputy chairman of the State Planning Board, Jagdish Nehra, a former minister, and Shilpa Verma, president of the District Mahila Congress, are among the 20 aspirants for the Rania seat, while KV Singh, former OSD to the Chief Minister, Ravi Chautala and Kuldeep Gadrana have sought the ticket from Dabwali.
While the observers met the aspirants or their representatives one by one, their supporters raised slogans in and outside the Congress Bhawan.
Vehicular traffic remained paralysed near the Congress Bhawan throughout the day as a large number of Congress workers assembled as a show of strength for their respective leaders. 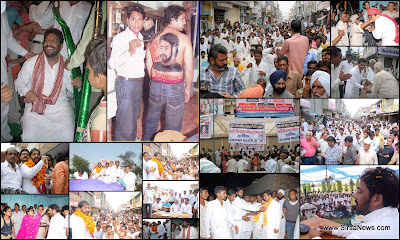 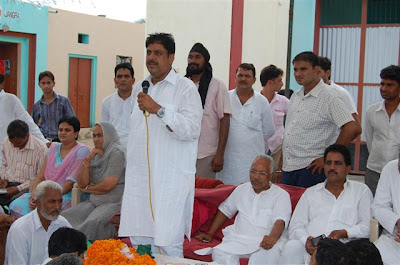 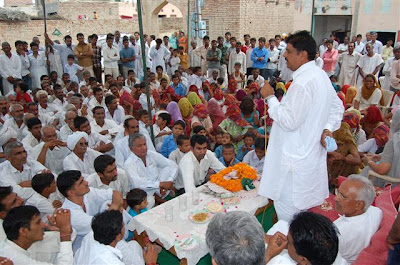 Sirsa Sizzlers (http://www.sirsasizzlerscricket.com) clinched the title with an exciting two-wicket triumph over never-say-die LIC Warriors of Chandigarh in a pulsating final of the Jan Nayak Chaudhary Devi Lal International T-20 Cricket League at the Jan Nayak Ch Devi Lal National Vidyapeeth ground in Sirsa on Wednesday night.
Click here for rest of the results from the official website (http://www.sirsasizzlerscricket.com/Result.html) 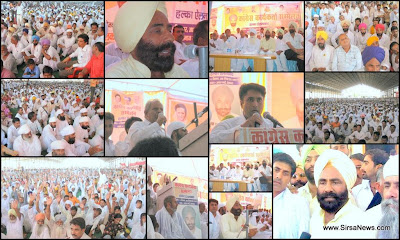 In a public meeting held in Ellenabad, under huge Anaj Mandi sheds, packed to brim, Congress Leader of this region, S. Malkiat Singh Khosa staked his claim for the Congress Ticket from this assembly.

Addressing the gathering, Mr. Khosa said that today’s seminar of Congress workers has turned into a huge public meeting (Jan Sabha) thus justifying his claim for allotment of Congress ticket from this constituency.
SirsaNews Video:


He said that given a chance to contest elections from Ellenabad, he was sure to win and thereafter he shall strive hard to work for this constituency which had been an area of great neglect on all fronts since last several decades. Talking to newsmen after the Public Meeting Mr. Khosa said that he shall not discriminate anyone for his position or affinity to any party, and shall try to bring educational institutions, an ITI, a Polytechnic College, etc to Ellenabad and shall also impress upon the Government to create a Special Economic Zone (SEZ) in this region as the area is industrially very backward.

“Policies of PM Manmohan Singh, AICC President Sonia Gandhi and development works of CM Haryana Mr BS Hooda, in last 5 years, have instilled such confidence in electorate that there is no sign of Anti incumbency in Haryana anywhere” added Mr. Khosa.
This constituency now in General Category had been a reserved (SC) category constituency before delimitation and had been a stronghold of Indian National Lok Dal (INLD) in the past. 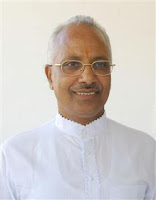 INLD Releases list of 42 Candidates; Padam Jain fielded from SIRSA ; Charanjeet Singh from Kalanwali
HJC ( BL) & BSP Honeymoon Over
INLD to go Alone
HJC (BL) may tie with BJP
Gopal Kanda to file nominations on Sept 24th
SIRSA NEWS ( www.SirsaNews.com )
05 September, 2009
All pictures can be clicked to enlarge or right click to open link in new window. Pictures: Amit Soni
The last two few days saw hectic activity on election front in Haryana with older tie ups perishing and newer possibilities being explored. While Congress ticket aspirants keep struggling for the ticket at Delhi. Gopal Kanda stepped up his campaigning as an independent candidate. HJC-BSP tie-up snapped even as joint public meeting of the due were in schedule. HJC Exploring new friends in BJP for a possible alliance.
Below is the list of 42 INLD candidates announced recently: 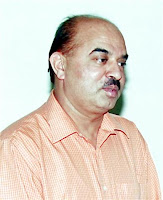 SDM Sirsa, Sh. Rakesh Yadav is No More
SIRSA NEWS ( www.SirsaNews.com )
02 September, 2009
All pictures can be clicked to enlarge or right click to open link in new window. Picture: Amit Soni
SDM Sirsa Sh Rakesh Kumar Yadav an HCS officer of 1999 batch breathed his last at a Delhi Hospital, he had been facing unbearable headache for which he had been under treatment at Delhi recently. He is bereaved by his wife, his son, and his daughter, his son is taking lessons in Commercial Pilot Course, and his daughter is in Class XI.
Posted by GS Mann at 8:41 AM No comments: 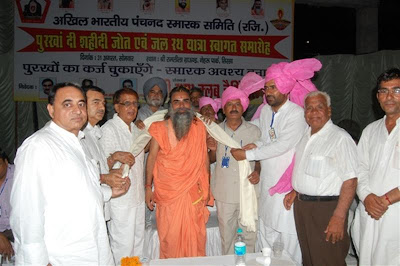 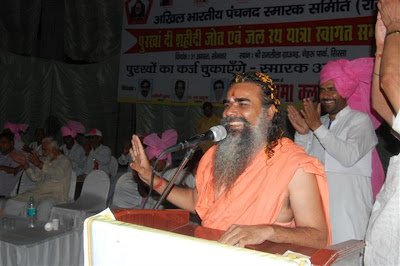 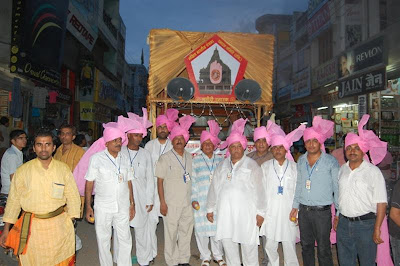 Panchnad Samiti: 'Shaheedan Di Jot' and Jal Rath Yatra Reaches SIRSA
SIRSA NEWS ( www.SirsaNews.com )
01 September, 2009
All pictures can be clicked to enlarge or right click to open link in new window. Pictures: Pardeep Sachdeva
Panchnad Samiti: Shaheedaan Di Jot and Jal Rath Yatra Reached SIRSA on 31st August 2009, the Yartra was welcomed warmly first at Punjab Palace on NH10. Spokesman for the Panchnad Samiti said that the idea behind the Yatra is to make people remember the great sacrifice that our ancestors had to give on the Partition of India.
Posted by GS Mann at 8:34 AM 2 comments: