Congress Saboteurs to be dealt with severely- BS Hooda 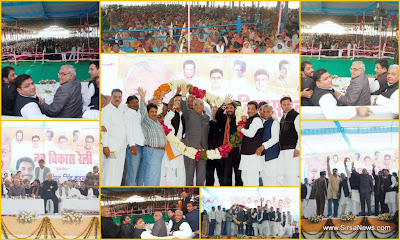 Congress Saboteurs to be dealt with severely- BS Hooda

Rs38 Crore Stimulus Package Announced
SIRSA NEWS ( www.SirsaNews.com )
29 November, 2009
All pictures can be clicked to enlarge or right click to open link in new window. Pictures: Amit Soni; Videos: Dinesh, Nakul Jasuja, GS Mann Video Below
Addressing a mammoth gathering at Nav Vikas Rally held under Anaj Mandi Sheds in Ellenabad town of Sirsa district, Chief Minister Haryana, Ch. Bhupinder Singh Hooda said that in the by-election to be held in this constituency, if any Congress leader tried to sabotage the prospects of the Congress candidate, he shall be dealt with severely. "Jo Ummeedwar ki tang Khenchega, Uski Tangain main kheenchoonga.” Mr. Hooda admitted that this region needed strong development programs to overcome problems of people, to start with he announced ‘Stimulus Package’ of approximately Rs. 38 Crores for the development of drinking water supply systems and sewarage system of Ellenabad town as well to developed several more water works in the villages of this constituency.

He agreed that the area is still very backward as the previous regime (Chautala’s) had never done anything for the development of this region, he promised that if Congress wins this assembly seat, then he shall lay the foundation stone of a Government College in Ellenabad, on the very day he shall be visiting Ellenabad to thank the voters.
Mr. Hooda said that Mr. OP Chautala who had tricked the voters to make him a winner from this constituency has now betrayed them by resigning from this constituency. 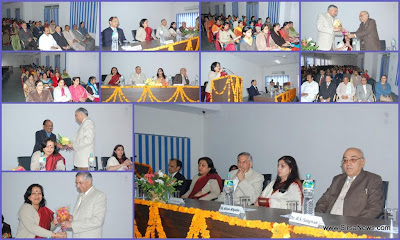 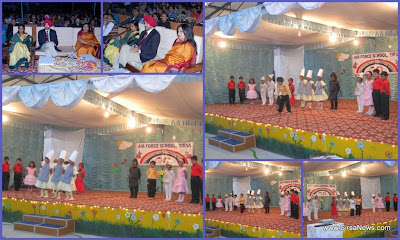 Congress Infighting is Out again

Even much before the announcement of the by election of Ellenabad, and not caring for the oncoming Congress Rally on 29th November to be addressed by CM Haryana, Congress men who had assembled at Congress Bhawan in Sirsa to iron out differences in the command of Phool Chand Mulana, instead took to volley of words leading to scuffles and manhandling of each other.

Pandemonium prevailed during Haryana Congress workers meeting held at Congress Bhawan here today and chinks in the ranks of the party came to the fore.

According to party sources some of the workers were even manhandled by the rival groups. 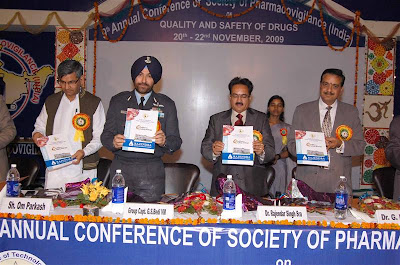 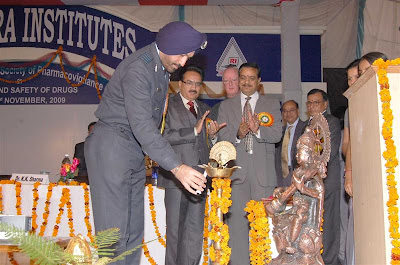 Video of Cultural Program at end of the Conference:

National Annual conference of Society of Pharmacovigilance at Rajendra Institutes 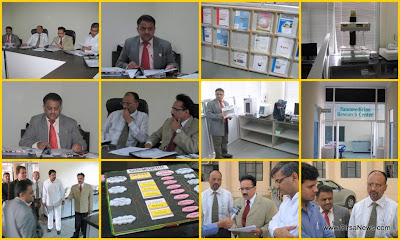 National Annual conference of Society of Pharmacovigilance at Rajendra Institutes
SIRSA NEWS ( www.SirsaNews.com )
19 November, 2009
All pictures can be clicked to enlarge or right click to open link in new window. Pictures & Videos: Nakul Jasuja, GS Mann
The 9th Annual Conference of Society of Pharmacovigilance (India) is being held at Rajendra Institutes of Technology & Sciences. Addressing a curtain raising press conference at the Institute Dr. Rajender Singh Sra Director of the institute said that the 2 day conference starting on 20th November shall be a conference of eminence for doctors, pharmacists, and paramedics of the region apart from the students of the institute. The conference shall conclude on 22nd. On Workshop Inaugural day on 20th November, the Chief Guest shall be Dr. Marie Lindquist, Director WHO CC Sweden, while on 21st November, the chief guest at the Conference shall be Group Captain Dr. GS Bedi VM Station Commander, Air Force Station, Sirsa 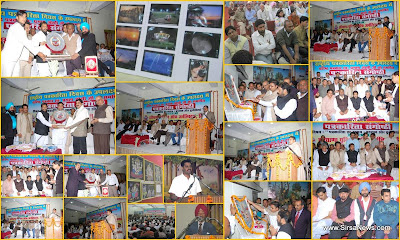 Noted journalists Jagwinder Patial of Star NEWS Chandigarh bureau and Yashwant Singh of www.Bhadas4media.com delivered the expert lectures on the seminar. Jagwinder Patial compared Indian TV Channels with BBC and said that technology wise Indian TV does not lag behind any of the channels of the west, but to improve it credibility journalists have to come forward to bring about the truth with courage. Mr Yaswant Singh stressed that we must de-link media from market forces if we wish to see it again in its past glory.

Mr. Ashok Tanwar said that some positive steps need to be taken for reforms in media.
Mr. Gopal Kanda said that CM Haryana has taken several steps for the welfare of the media and a media policy is on the anvil.
Soon after the conclusion of the seminar, Mr. Gopal Kanda while addressing media persons announced that on 23rd November a huge rally shall be addressed by CM BS Hooda at Anaj Mandi Ellenabad. This time the wheels of progress shall start from the remotes town of western most Haryana-Ellenabad. 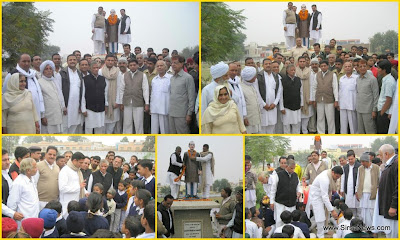 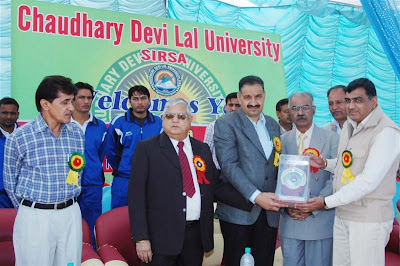 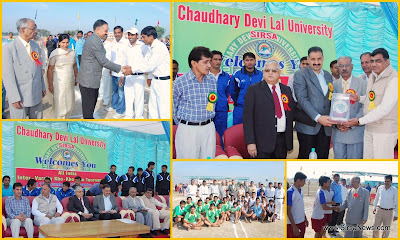 First All India inter-varsity Kho-Kho Championship was inaugurated yesterday at CDLU sports grounds by Mr. Subhash Yadav SP Sirsa. He was flanked by VC Dr. KC Bhardwaj & Dr RK sehgal on the occasion. Dr Deepti Dharmani of English Department anchored the stage during the inaugural function. While Dr. Surender Kundu of commerce department delivered the commentary on the matches. 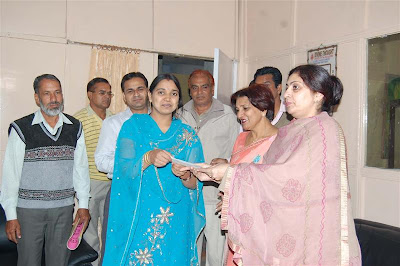 Development of Sirsa to be at Par with the state : State Home Minister Gopal Kanda 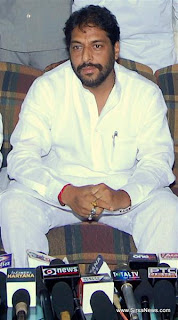 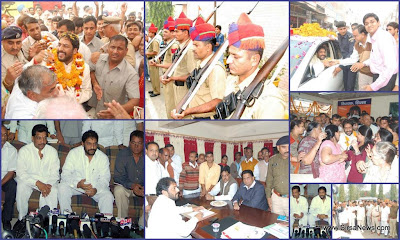 Development of Sirsa to be at Par with the state : State Home Minister Gopal Kanda.
SIRSA NEWS ( www.SirsaNews.com )
09 November, 2009
All pictures can be clicked to enlarge or right click to open link in new window. Pictures: Amit Soni; Videos: Amar Singh Jyani, Nakul Jasuja. See Video Below In The NEWS Text

THE NEWLY appointed Minister of State for Home and Industries and sports and Youth Affairs Mr Gopal Kanda who won the Sirsa assembly seat as an independent candidate and who along with all other Independents supported and buttressed the Bhupinder Singh Hooda, while addressing his first Press conference here today asserted that his first priority would be to nurture Sirsa constituency and to ensure its all round development. In reply to a question he said that he would make every possible effort to enforce the directives of the Apex court regarding reforms in the functioning of the Police department to make the force People friendly.

He said that he had already directed the bureaucratic officials in the district to be present in time in their respective office and to redress people’s problem without any consideration of caste, creed or political affiliations. When asked about the absence of all local congress people yesterday when he arrived here after taking the oath at Chandigarh, he said that the Congress high command or Chief Minister Hooda would take care of them. He said as and when by-election would be held for Ellenabad seat which fell vacant after Mr. OP. Chautala resigned after he had won from both Ellenabad and Uchana, he would abide by the wishes of the Congress High Commamd and Mr. Hooda. 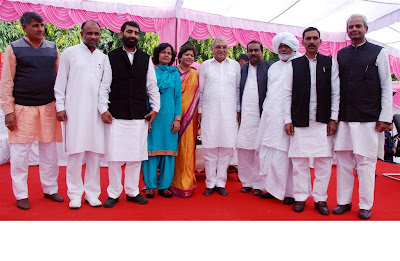 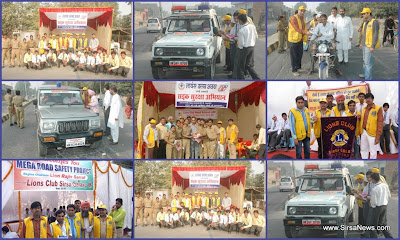 LIONS CLUB Aks, of Mandi Dabwali president, Satish Jagga informed SirsaNews that Reflecting tape and reflectors were also affixed behind Tractor Trolleys and other such vehicles which do not have tail lights. All through the day people from all walks of life, politicians from ruling party as well as opposition, children, police and administrative officials were kept involved by CLUB officials in one way or other so that a greater number of people take the message about road safety.

In SIRSA apart from different local units of LIONS CLUB the local CDLU Community Radio Station also kept appealing road users about Road Safety through out the day through its radio broadcasts that have become quiet popular with local audience. Seat belt users were felicitated by offering them a candy while non users were handed over a hand bill about the benefits of Helmets and seat belts published jointly by the CLUBS.

Here is a recording of FM Radio that was broadcast recently by Hello Sirsa FM90.4 recently mainly the subject of this talk show was also about Traffic problems of SIRSA and region. The talk is between GS Mann and Virender Chauhan Station Director FM Sirsa with inputs from citizens of Sirsa via phone calls. (Click here for Radio Talk Hello Sirsa on CDLU FM90.4)

SirsaNews had always been sensitizing people and impressing upon administration to check the chaotic traffic since its inception. Click on link below to read previous write-up on Road Safety and suggestions to Administration and Organizations about this monster problem. http://sirsanews.blogspot.com/2006/01/road-safety-week-2006.html
For other NEWS on Road Safety: Search http://www.sirsanews.com/ for road safety posts 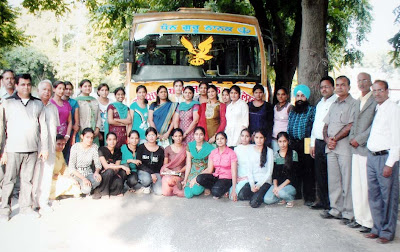 See Video below: More Videos at www.youtube.com/sirsanews
Posted by GS Mann at 8:50 PM No comments: 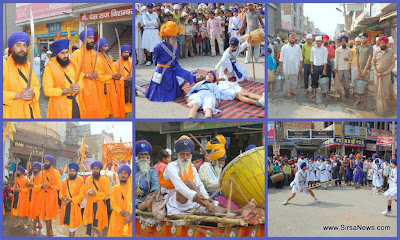 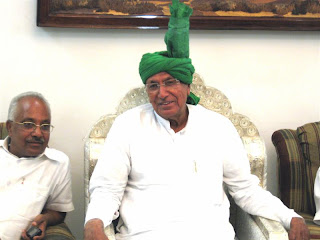 HOODA led Haryana Government would not last long - OP Chautala
SIRSA NEWS ( http://www.sirsanews.com/ )
02 November, 2009
All pictures can be clicked to enlarge or right click to open link in new window. Pictures: Amit Soni; Videos: Amar Singh Jyani, Nakul Jasuja, GS Mann
The minority govt. led by Bhupinder Singh would not last long and would fall
soon due to internal pulls and pushes and would pave the way for another Assembly elections in the state. This was stated by INLD supreme and MLA f rom (Ellenabad and Uchana kalan). He claimed that in case Hooda completed the full term it would the 8th wonder of the world, as he would not be competent to accommodate all the aspirants for berths in the cabinet. Mr. Chautala alleged that Mr. Hooda was misleading the people by making false promises and announcing a plethora of soaps for which he would miserably fail to provide funds. He said that Hooda was also indulging in wasteful expenditure on his much hyped Hansi Butana canal for which he would fail to get water and further alleged that it was the wanton misuse of the public exchequer and asked as to who would compensate for the losses. He futher alleged that the Congress Governments both in the state as well as at the centre are responsible for no completion of the Haryana’s life line the SYL canal for which then govt. of Ch. Devilal had already deposited a sum of Rs. one crore to the Punjab Govt. as the cost of the land acquired for the construction of the SYL canal. He wondered that even after the orders of the apex court the Centre was dilly dallying the construction of the canal. He further claimed that when his party would come to power in the state it would ensure canal’s construction.
Report: Dr. OP Bansal
Posted by GS Mann at 4:36 PM No comments: 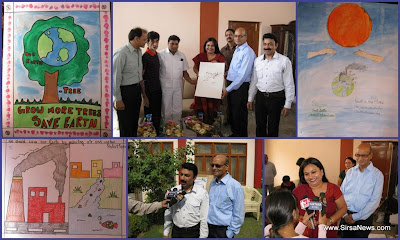