All pictures can be clicked to enlarge or right click to open link in new window
Jind DSP Rajinder Singh was today booked for causing death due to rash and negligent driving by the police after two railway employees were killed in a road accident on the National Highway-10 here this morning.

The DSP also sustained serious injuries in the mishap and has been referred to the PGI, Rohtak. The police have registered a case under Sections 279 and 304-A of the IPC against the DSP in the Sadar police station.

The accident took place when the DSP who himself driving his Alto Car was on his way to a District courts at Sirsa to attend a hearing
Posted by GS Mann at 9:33 PM No comments:

All pictures can be clicked to enlarge or right click to open link in new window
Posted by GS Mann at 8:35 PM No comments: 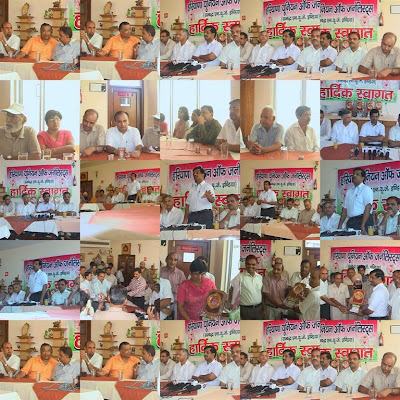 All pictures can be clicked to enlarge or right click to open link in new window
Posted by GS Mann at 8:13 PM No comments:

14 September, 2007
All pictures can be clicked to enlarge or right click to open link in new window 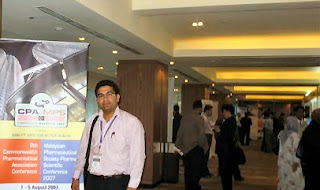 Mr. Sameer Dhingra, Chief Incharge, Haryana State Drug Information Centre and Sr. Lecturer at Lord Shiva College of Pharmacy, Sirsa presented a research paper “Drug Information Service by a Pharmacy College in India” held on 01-05 August 2007 at Kuala Lumpur, Malaysia organized by Common Wealth Pharmaceutical Association in assistance with Malaysian Pharmaceutical Society. The theme of the Conference was “Quality Care for Better Health”. It encompassed various topics including counterfeit medicines, infectious diseases, rational use of medicines, new technology in drug delivery, chronic disease management and medications reviews, which were attended by a large gathering of scientists from different parts of the world. He has also delivered an invited lecture on Indian Pharmacy Practice at University of Sains, Penang, Malaysia during his stay at Kuala Lumpur. Both the presentations were appreciated from all fronts and there was a fruitful interaction with the participants from various countries. Read related News on Sirsa News dated 26th July, 2007 or click ‘here’ .
Posted by GS Mann at 9:46 PM No comments: 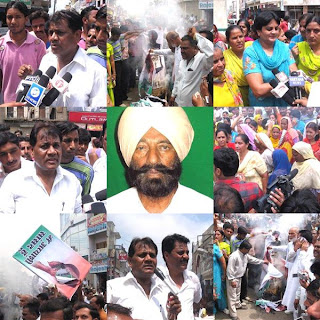 All pictures can be clicked to enlarge or right click to open link in new window.

Congress MP from Sirsa in Haryana, Atma Singh Gill, faced public anger and humiliation as hundreds of Indian National Lok Dal (INLD) members agitated in the middle of the night demanding his resignation over his alleged ‘immoral act’ at a PWD guest house in Narwana.

The Congress MP was found in an inebriated condition with two women at the guest house in Narwana on Thursday night. The police and the sub-divisional magistrate forced the door to his suite open and took him away, even as the INLD supporters were protesting.

However, no case has been registered against the MP in the absence of a complaint. Caught unawares when scores of locals, police and the local TV crew arrived on the scene, Mr Gill said both women were his relatives.

“It is a political controversy. The women are my daughters-in-law. She lives in a nearby village (referring to one of them). I was going from Chandigarh to Sirsa, and gave a hitch to them at Kaithal, and in between stopped at Narwana guest house, so she came along with me,” he said.

His son Gurdeep Gill, who fought the elections from Ratia, said, “The INLD is particularly disturbed with the popularity of my father and they have hatched a conspiracy against him.”

The INLD supporters, however, say the liquor bottles found in the MP’s room were evidence that there was more to the story. It was also confirmed that Mr Gill had not made any entry of his presence in the rest house register. All three, two women in question, and Mr Gill, who were rounded-up at 11:00 pm, were let off in the morning at 6:00 am, sources said.
While the INLD said it was unbecoming of Mr Gill, Congress workers said it was a case of extreme moral policing, and hyperactivity on the part of an out-of-power INLD
Posted by GS Mann at 9:07 PM No comments: 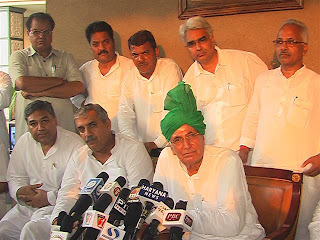 Ex CM Mr. Om Parkash Chautala, today in a press conference held at his Sirsa residence ‘Chautala House’ said that mid term elections are inevitable in the face of stiff opposition to Nuclear Deal, he said that it could happen any time around mid 2008. He said that the third front UNPA had been opposing the N-deal from day one, he commented that that the Power Shortage in Haryana is fictitious and is due to mis-administration; if INLD returns to rule the state he can provide 24 hour electricity in just 48 hours of time.

He brandished Congress Government as government of property dealers, he said the people of the state were reeling under acute power and water shortage and commodities prices of sky rocketed.
He said the SEZ’s (Special Economic Zone) were anti people projects, these shall only benefit corporate sector and not the people of Haryana, and instead he said that these shall be replaced by MIR (Manufacturing Investment Regions) 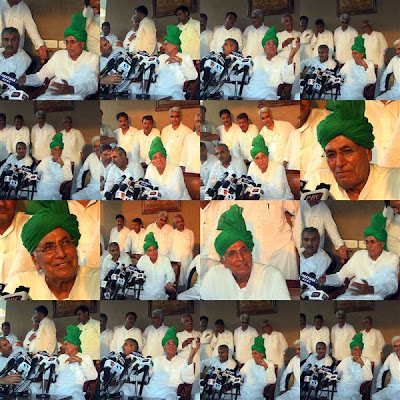 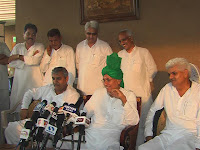 All pictures can be clicked to enlarge or right click to open link in new window
Posted by GS Mann at 6:24 PM No comments: