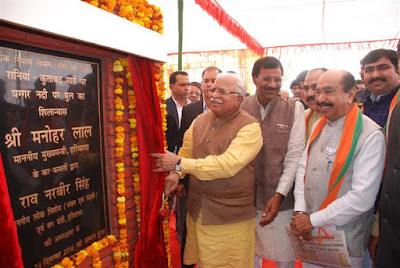 
Mr Manohar Lal announced that canal based water works would be constructed in village Mangaliya at a cost of Rs two crore, in village Haripura with Rs 6.5 crore and in village Jhoradnali with 4.5 crore. Similarly, Submersible tube wells would be installed in water works at Jivannagar and Titukhera. He said that bank services would be started in Kariwala and other villages by Bank of Baroda and other Banks.  He  also announced to expand Naiwala Kharif Channel, completion of Ratakhera channel, construction of seven water courses in different villages, construction of road from Panniwala Moto to Ramnagar and  Sahuwala-1 to Khuiyan Nepalpur and widening of road from Bani to Bechar. Apart from this, he also announced to set up veterinary hospital and health centres in various villages of the constituency. He also announced to set up seven new vyayamshalas. He said that rejuvenation of various tributaries would be done with an investment of Rs 4.5 crore.
Posted by GS Mann at 12:20 AM No comments: 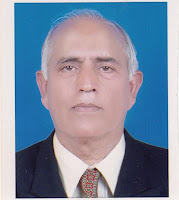 Talents of Wisdom – Dr. TN Chugh
SIRSA NEWS
( www.SirsaNews.com )
24 December, 2016
Pictures and Videos: GS Mann
Talents of Wisdom
Wisdom is the ability to think and act on using knowledge, observations, mental assumptions and experience. It also depicts the quality of an individual to perform with righteous judgment, intelligence and additional faculty. According to Oxford dictionary, Wisdom is the capacity of just going rightly in matters relating to life and conduct, soundness of judgment in the choice of means and in practical affairs opposite to folly. The psychologists suggest that wisdom involves a combination of knowledge, deep understanding and even tolerance for the uncertainties (ups and downs) of life. It brings good awareness and sense of balance. The concept of sapience is derived from a word of Latin language ‘Sapienta’ which means Wisdom. A few more synonyms related to wisdom are, sagacity, intelligence, perception, acuity, discernment, prudence, circumspection, perspicuity, insight etc. Knowing  yourself is the beginning of wisdom.
Knowledge and Wisdom:
1.     Knowledge is mainly perceived through study, observation and investigation. The ability acquire knowledge effectively helps to enhance the status of wisdom because it is utilized in practical and productive manner. Both are inter-linked, as the qualities of wisdom become exponential due to practical applications of knowledge. Although, knowledge is mostly generated from external sources of books, teaching, computers, video, pictures etc., but wisdom can be mainly determined through internal sources of introspective thoughts, analysis, resolutions and repeated judgments.
2.    Wisdom perceives clearly with righteous thinking to apply the correct and lasting schemes of knowledge for progress and prosperity of life.
3.    If certain aspects of knowledge can help in earning, spending and saving money, wisdom can manage its impacts on the quality and future of life.
4.    Knowledge provides means to seek pleasure and happiness. Wisdom explains that true delight is not obtained from things or situations but it comes from within.
5.    Knowledge is information and confident understanding of a subject with the ability to use it for a specific purpose. Wisdom is quality to make righteous judgment and decision gained through repeated experiences in life.
6.    Wisdom governs choice and chase of knowledge, communication and affinity. It is also related to introspection, ‘who we are and what we do’?
7.    Wisdom defines and refines our character in addition to learning, reflection and logical thoughts.

Attempts to Acquire Wisdom:
The wisdom comes from personal experience that makes the mind vibrant. The information gained from books or simple learning counts little, unless it is supplemented with long and variable observation, serious thinking and proper evidences. Wisdom is essential for people of every section belonging various disciplines, men and women, businessmen, officials, lawyers, teachers, players, coaches, medical experts and many more.
v Traditionally, the teachers take the responsibility to build the character and wisdom.
v The parents and eminent persons of community tend to share their experiences and skills.
v Learn through quality literature which is in addition to specified books prescribed for syllabi.
v Visit places of historical importance.
v  Attend seminars and debates on substantial topics organized by prominent institutions.
v Try to establish links with talented and experienced officials.
v There is misconception that wisdom can be acquired lot of experience in aged persons. Actually wisdom emerges from thoughtful reflection on learning, gained from deep and varied personal observations. For instance, intelligent persons secure success in competitive examinations of high status (IAS, IPS, IRS, IFS in India) at the age of about 28-years.  Likewise, the master degree of medicine, law, engineering, administration etc. can be achieved at this age. Therefore, the exact connection between age and wisdom should not be doubtful. Do not wait until you are old beyond 55-years.
v Advance your own objectives but also search ways and means to benefit others. There is no doubt that wise person’s offer good advice to others and make better choices themselves.
v Analyze the existing regulations instead of accepting as these have always been. Try to explore better path through practical experience.
v Concentrate more on positive aims and objectives along with pleasure.
v We can gain knowledge from our teachers to do the best in our life but wisdom is not a product of schooling but of a lifelong attempt to acquire it.
v We are made wise not only through recollection of our past, but the responsibility for our future.
v According to the philosophical concept of Confucius, we may learn wisdom, first by reflection which is noblest; second by imitation which is easiest; third by experience which is bitterest.
The views of Insight:
The insight denotes the ability to clearly perceive deep qualities of mind (thoughts and actions).it is the deeper perception of life, knowledge and wisdom. According to Hindu religion, wisdom reflects the state of mind and soul where a person achieves liberation. Many worship ‘Ganesh Ji’ as god and ‘Sarswati’ as goddess of knowledge. They believe that ‘truth’ is the basis of all creations. In other words, a person with self awareness is wise, who witnesses the total creation in all its facts and forms. The people realize through righteous behavior and peaceful living with delight, their true relations and benevolence with the sole creator ‘Divine Lord’. Do not always believe in conversion rather concentrate on inversion.
Benefits of Wisdom:
·       An ounce of wisdom is better than tons of knowledge.
·       Wisdom is the disposition to decide about the righteous actions for any task.
·       It improves the qualities of knowledge through good judgment and experience.
·       It confirms the basis of sensible and wise thinking developed within a specified society or period.
·       Gain confidence and social status.
·       Wisdom reflects the state of purity and peace of mind.
·       Virtues appear from good deeds and wisdom from a pure and peaceful mind. One requires the light of wisdom and guidance of virtue to lead a safe and happy living.
The Real Talent :
Knowledge is familiarity, awareness or understanding of someone or something such as facts, information, description or skills which are acquired through education, experience, perceiving, learning or discovery. It can be theoretical or practical understanding of any subject. Whereas, according to Adiana Koulias, wisdom can be acquired with the eyes of faith, we come to recognize the drop of divinity residing in our own souls through hidden master. Conceit is self given, be careful; fame is man given, be grateful; talent is God given, be humble.
There is neither eternal misery nor happiness in the world. He who has left the deepest grief is best able experience supreme happiness. Until the day the God will design to bless the fortune to man, the human wisdom is contained in hard work, wait and hope. The Divine power does not seem to look over diplomas, degrees or medals but for the virtuous qualities of humanity and submission to meditation. Let us pray, to grant us the serenity to accept the things we cannot change, courage to change the things we can and wisdom to realize the difference.
Contributed by: Dr. Triloki Nath Chugh.
Co-ordinator, Shah Satnam Ji Educational Institutions, Dera Sacha Sauda, Sirsa (Haryana, India ).


The writer is an eminent former Professor of Zoology; he has more than 3 decades of teaching experience in various colleges of KUK and is presently Co-ordinator, Shah Satnam Ji Educational Institutions, DSS, Sirsa. He can be reached on his Mobile No:+91-94160 48789 and email: trilokichugh@gmail.com . Dr Chugh has published many Zoology research papers; Guided several M.Phil students for research; M.Sc. Secured 2nd Position BITS PILANI 1968; Gold Medalist in French Diploma 1981 KUK; Prinicipal at SSS Boys College for 7 years.
Posted by GS Mann at 9:00 AM No comments: