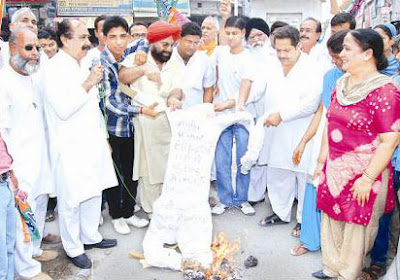 INLD also held demonstrations in Rania against inflation, while Ch Abhay Singh Chautala held a press conference at Village Raghunana at the residence of Sukhbir Singh Sidhu and briefed about almost 1 month long Jan Chetna abhiyaan of INLD against Haryana Government. He also said that he will meet Governor Haryana regarding the demand for the transfer of DC and SP of Sirsa.

CPI and CPM also held demonstration against inflation and demanded immediate flood control measures by excavation of Creek of Ghagger downstream of Ottu weir and strengthening of its banks.

Monsoon only few Stops away from SIRSA 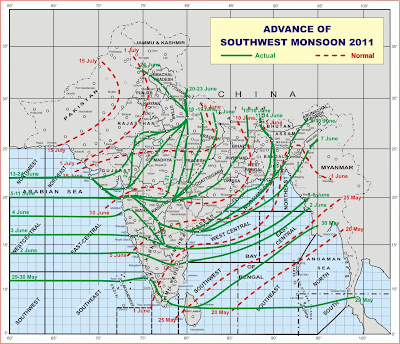 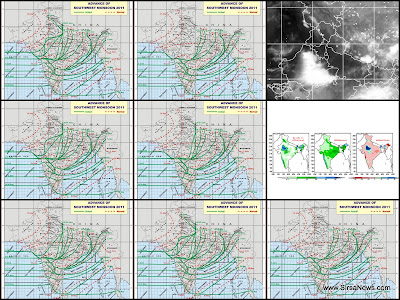 Monsoon only few Stops away from SIRSA

The wait for pre-monsoon rains followed by monsoon rains seems to be ending very soon. Despite the apprehensions of Indian Met Department of a weak monsoon, the charismatic monsoon has prgerssed very well and has kept pace with its normal dates. Just go through the different pictures below and you will come to know that monsoon is just a few stops or a few districts away before it enters Haryana this time probably form the Himachal doors into Haryana. If it kept leaping at this speed it should be into Haryana from the Ambala side before 1st of July, and in the 1st week of July it should be in SIRSA. But to give respite from scorching hot and humid days, pre-monsoon rains should strike Sirsa earliest in the evening of Sunday or latest by Tuesday. Fatehabad should get pre-monsoon showers a day ahead of Sirsa and this will help cooling temperatures of Sirsa as well.

It may be noted that arrival of Monsoon is not always a surety of rainfall, this is exactly what IMD wants to convey when it says that Monsoon may be deficient. But let us hope that just like last year, this year also, monsoon keeps its date with Haryana and Sirsa in particular. Despite all the flooding of Sirsa City and its towns, and a still uncared for Ghagger River, its embankments and the Creek downstream of Ottu where Ghagger created havoc last year, Monsoon is still much needed and more than welcome.

Ms. Amanbir Kaur Brar originally of village Mithree situated on Siras-Dabwali road (NH10) Sirsa has been appointed as Immigration officer by Government CANADA in Toronto recently. Ms Amanbir Brar is daughter of S. Sukhraj Singh Brar (Advocate) who is a practising lawyer at Punjab and Haryana High Court Chandigarh since last over 2 decades. Ms Brar is also (L.LM. Post Graduate Degree in Law) and holds a post graduate diploma in Journalism and Mass Communication. before she accomplished this new prestigious appointment she had had a stint as APRO with the DPR Haryana Chandigarh. She had been writing for Haryana Revue, English Edition an official publication of Haryana Government. Mr Sukhraj Singh Brar a soft spoken, self made personality also had been a journalist and had been a reporter for a Punjabi Daily, before he took to Law practice at first at Distt Courts Sirsa and later till now at High Court Chandigarh. Mr Sukhraj Brar was also appointed as Deputy Advocate General for a term.

Bring PM in the ambit of LOKPAL Bill- OP Chautala

Bring PM in the ambit of LOKPAL Bill- OP Chautala

The program had a huge gathering as the main leader behind this event was Ch Ranjit Singh Ex Deputy Chairman Planning Board who is known to be a crowd gatherer.

2nd Program was laying of foundation stone of 95 KM long Guru Gobind Singh Marg, the foundation stone was laid at Gurugobind Singh chowk near Sangwan Hospital. This program was also largely attended by Sikhs from city and villages of Sirsa, the attendees kept waiting patiently under the Sun till 1:45PM when the CM Arrived. (A separate post with detailed audio video coverage of this program shall be carried out in Sirsa NEWS soon.)

Presiding over this function CM Hooda spoke in almost flawless Punjabi, and said that as Congress Govt has given the 2nd language status to Punjabi in Haryana, now it is pertinent for him to speak in Punjabi and he is trying to hone his Punjabi speaking abilities. The Program had almost all the Congress Leaders, Dr Ashok Tanwar, Ch Ranjeet Singh, Sh Jagdish Nehra, Dr KV Singh, Sh. Gopal Kanda, Sh. Govind Kanda, Perhlaad Singh Gillankhera, S. Jasbir Singh Riar, Malkiat Singh Khosa on one stage and there did not appear any chinks as alleged in the Congress at least on this stage. Mr Jagdish Singh Jhinda, president HSGPC Adhoc and Comrade Sawarn Singh Virk addressed the congregation apart from several of the above.

Rest of the programs in pictorial form are as below.

Complete Bandh in SIRSA on Call of INLD

Complete Bandh on Call of INLD

The 11th June Rally of CM Hooda was marked by complete shut down of Sirsa and even its townships on the call of INLD. Ch Abhay Singh Chautala INLD MLA from Ellenabad had announced this Bandh on June 2nd on INLD Yuva Rally. Ch Abhhay Singh of INLD had asked for this Bandh in protest to escalated crime in Sirsa district and attributed this rise in crime to the inefficiency of the present SP Sirsa Mr. Satinder Kumar Gupta.

On the morning of June 11th , a huge gathering of INLD workers was addressed by Dr. Ajay Singh Chautala and Ch. Abhhay Singh Chautala under one of the sheds located in south of Anaj Mandi Sirsa before taking out a procession from middle of the city up to Surkhab tourist complex, where a memorandum was handed over to SDM Sirsa to be forwarded to Governor Haryana through SIRSA.

Pictures and Video of the Bandh.
Posted by GS Mann at 5:11 PM No comments:

7. Dharna in support of Baba Ramdev at Mini Secretariat.

The INLD shall go with its plans of Bandh on 11th June, the day CM Haryana is visiting Sirsa. SP Sirsa has recently claimed to have resolved the Ellenabad dual murder case and taken the accountant of victim family's business in its custody as the main accused. Earlier police inaction and then improper action on two of the family members of the family of the victims was being resented by residents of Ellenabad. INLD under the leadership of Ch Abhay Singh Chautala MLA had extended direct support to the protestors and announced immediate transfer of SP Sirsa before 11th June or face Sirsa Bandh.

Today talking to press at his residence, Ch Abhay Singh Chautala said that Bandh on 11th shall be complete and INLD shall also take out a procession from Anaj Mandi to Mini secretariat in the morning of 11th, a memorandum demanding CBI inquiry into this double murder case, and demand for transfer of SP Sirsa, addressed to Governor Haryana shall be given to DC Sirsa for forwarding. Ch Abhay Singh said that the Police claim seems to be a false story and they have nabbed an innocent under pressure of oncoming CM visit.

Meanwhile Congress leaders especially related to leadership of Sh. Gopal Kanda are wooing public in villages and towns of Sirsa to attend various programs of CM on his 11th June visit to Sirsa.

His followers and party workers of HJC-BL left for Hisar on getting the news. The Last rites as per Bishnoi Rituals shall be held on 4th June at Mandi Adampur near Hisar.Three-time Haryana chief minister and former union minister Bhajan Lal was 81. He had contested the last election as a nominee of Haryana Janhit Congress-BL, formed by his younger son Kuldeep Bishnoi. Bhajan Lal, was a veteran Congressman who brought together all the non-Jats and managed to find a strong foothold in the Jat-dominated politics of Haryana. Born on October 6, 1930, Lal received formal education at Bahwalpur now in Pakistan. Bhajan Lal was elected first time to the Haryana Assembly during the mid-term elections of 1968 from Adampur in Hisar district. In Sirsa Mr. Veerbhan Mehta heads his political party.

Addressing the INLD Yuva Sammellan, Chief Guest Ch Abhay Singh Chaulata MLA Ellenabad, said that INLD shall ask people of Sirsa to observe a complete BANDH on 11th June the Day CM Haryana is visiting SIRSA. The BANDH is being organized in protest to the total collapse of Policing and total failure of administration on all fronts. INLD is stressing upon the Haryana Govt for immediate transfer of SP Mr. Satender Gupta IPS and DC Sirsa Mr. YS Khyalia IAS. If the Government does not accede to its demands then the next step will be to step up the Andolan and take it in front of Haryana Vidhan Sabha in Chandigarh. The Yuva Sammelan of INLD was held at packed to the brims, Pritam Palace SIRSA, the city roads also faced congestion due to extra movement of vehicles leading to the INLD Sammelan throughout the morning till noon.
Posted by GS Mann at 6:57 PM No comments: