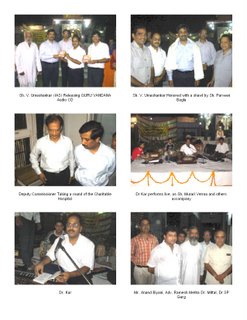 [To know more about Mr Murari Verma visit his web site: www.geocities.com/murarimusic ] [The site has not been updated lately]

Although the abilities of Dr. Kar as an eye surgeon are well known in the region, but only a handful of select audience knew of his talented singing based on Hindustani classical music, with this Audio CD & Audio Cassette, his rich trained voice shall reach a wider base of audience.

Sh. Parveen Bagla, chairman of the trust, welcomed Sh. V. Umashankar. Sh Umashankar, The Deputy Commissioner took a quick round of the charitable hospital flanked by Dr. SP Sharma, Dr. Mittal and others.

After the release of the Audio CD the deputy commissioner stayed back for the live program. Live performance by almost all the artists featured in the Album, and also by Mr. Ravinder Noor, Mr Raj Verma, S. Hardev Singh Naamdhari on Taar-Shehnai, an unusual instrument were applauded. Simran eight yrs old daughter of Ravinder Noor who sung ‘Aye Mere Watan Ke Logo…..’ enthralled the audience.

There after, Sh. V. Umashankar addressed the audience. He said that he has immense interest in music, at one time he used to be a violinist, but due to paucity of time now he is unable to pursue his this hobby. He appreciated all the artists and musician Mr. Murari Verma. He was introduced to Sh. Mahabir Parsad Mukesh chief patron of Sangeetika, Mr Mukesh, a septuagenarian is a violinist, and an acclaimed musician and has given training to many an artist of the region. (Sangeetika: An organization devoted to promotion of quality music, especially classical music in Sirsa region)

Mr Laaj Pusp, journalist, anchored the stage ably, as he has been connected to musical activities of the city since he was quiet young. Mr. Push in between the vocal events kept informing the DC about the musicians and artists of the region who have reached highest levels of accomplishments in their respective fields, like Mr. Jagjeet Singh the legendry Gazalist, Mr. Manmohan Singh, who is cinematographer par excellence in Bollywood, Bashir Badr etc.

Hindi Pages:
Links: ?? id.......broken links....
To View Hindi Pages You shall need Fonts of respective Publishers on your system.
Posted by GS Mann at 8:24 PM