Another first: Sirsa News Introduces NEWS-Videos (Video at the end of this news) 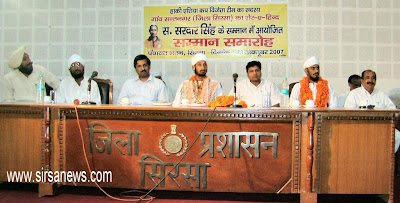 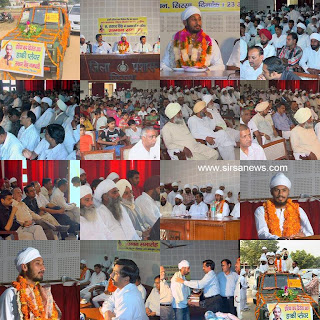 Sardar of Hockey gets Warm welcome

23 October, 2007
All pictures can be clicked to enlarge or right click to open link in new window

Sradar Singh Namdhari who belongs to Village Sant Nagar of SIRSA held important key position in the Indian team, credits his success to his parents and the training he got at Namdhari Sports Academy at Namdhari Sect Headquarters at Vill Bhainee Sahib in Ludhiana Punjab.

Mr. V. Umashankar who himself had been a keen hockey enthusiast announced cash incentive of Rs. One lakh to Sardar Singh for the laurels he brought to Indian hockey and SIRSA. The announcement was applauded by Bolo So Nihaal….reverberations [Watch and listen V. Umashankar in the SIRSA NEWS Video in this post]

Sardar Singh Namdhari told Sirsa NEWS that: The 2007 Men's Hockey Asia Cup was the seventh tournament of the Hockey Asia Cup for men. It was held from August 31 to September 9, 2007 in Chennai, India.

India thrashed Korea in the finals by a thumping 7-2 margin. They led 3-1 at halftime in a match which was ill-tempered at times and where India displayed superior skills and control. Early in the second half, Korea staged a walkout led by their coach for an umpiring decision to disallow a goal scored by Korea. Replays clearly showed that the Korean forward had struck the ball from outside the striking circle. To make matters worse for Koreans, India scored a goal through a brilliant counter attack in the very next minute with two Korean forwards still arguing with the umpire on the goal that was disallowed. Korea never recovered from that and after that, India's forward line went on a rampage in the second half scoring 3 more goals to make it 7-1 before Korea reduced the margin to 2-7 in the penultimate minute. Baljit Singh, the Indian goalkeeper, was declared the man of the match for his excellent saves. The striking feature of India's win was that all the 7 goals were 'field' goals and none of them came through 'penalty corners' or 'strokes'. India thus ended the tournament with 57 goals for and just 5 goals against them.
Play Video Below:

A note about Sirsa NEWS Web Videos (with Sound): To watch the videos properly, you must have an Updated Windows XP/Vista OS with all the plug-ins, and preferably a fast broadband internet connection, for dial up or mobile connections let the videos load, that may take from few to several minutes, then replay the whole audio/video uninterrupted.