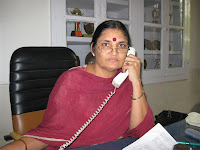 Much awaited demand of residents of Ellenabad area, to set up a Government College in this sleepy town seems to be fulfilled now, a team of Govt. National college on instructions of Haryana Government today inspected various buildings of Ellenabad to explore possibility of make shift arrangements of starting admissions from next academic session (Session 2010), so that in a year or so new building may be constructed. Dr. Suman Gulab principal Government National College Sirsa headed the team and short listed a few buildings; if any of these is approved by Government then classes may start this very session. It may be recalled that in December 2009 CM Haryana Mr. BS Hooda had announced that Ellenabad shall get a Government College very soon but he has not mentioned any dateline for the same, this even reflected badly on the Poll prospects of the Congress candidate in the by-elections held in January 2010, on the other hand Ex-CM Haryana and INLD Supremo, Sh. OP Chautala had announced during the same elections that a College in private sector shall be started under the aegis of CDMT from July 2010 session. If both colleges happen to start this very session it shall be big advantage to this educationally backward area of the district. A 3rd college is already running at Village Jeevan Nagar