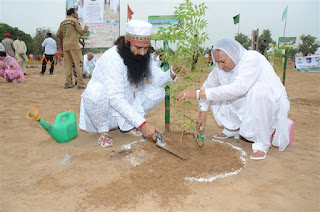 In the first hour of the mega drive, Dera followers had planted 2039747 saplings. By evening  3121203 saplings were planted, Dera Sacha Suada has beaten its own record of planting 938000 saplings on August 15, 2009. This was claimed by DSS spokesman Sh. Pawan Insan. He said that followers all over the world began planting saplings after the DSS planted the first sapling at 9.10 AM in Sirsa.

Data: As provided by the spokesman of DSS.