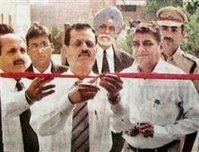 Mr. MP Mendiratta said while addressing the Jail Inmates and the advocates that making the inmates aware of their legal rights can help change their lives. They should get the benefits of Free Legal Aid Cell.

Mr. S.K. Singh an SDO of DHBVNL posted at Ellenabad, who was held under Scheduled Casts (Prevention of Atrocities Act), got a bail from the court.

Acting on court orders, Ellenabad Police had arrested Mr. SK Singh SDO, on alleged charges of abusing a farm laborer and passing derogatory remarks against the caste of the laborer at the premises of farmer’s tube well. The SDO was their on a theft checking campaign.

The SDO on the other hand said that he had never abused the complainant and the charges against him were false and were made to evade theft inspection.
Posted by GS Mann at 6:42 PM