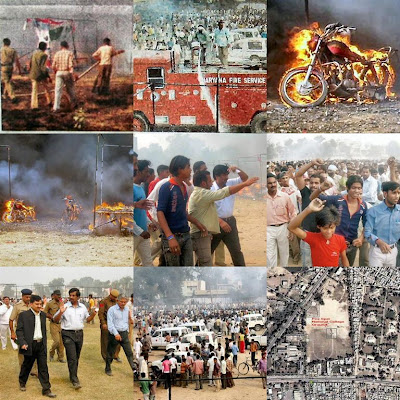 Some of the Above Pictures: Courtesy: Amit Soni
All pictures can be clicked to enlarge or right click on pictures to open link in new window
Satellite View of National College Grounds, where the fire occurred below 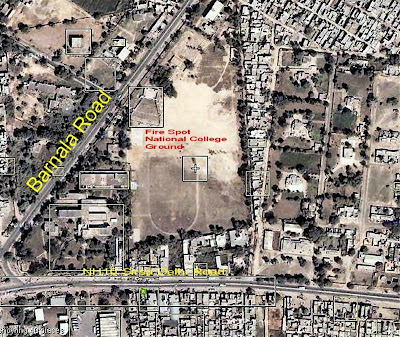 All pictures can be clicked to enlarge or right click to open link in new window.
[Wait for posting of Video NEWS at the Bottom of this NEWS]

In a major fire that gutted more than 100 firecracker stalls that had a temporary abode at the Government National College Sirsa Play Grounds on the afternoon of November 8th was luckily free of any causality. However monetary loss initially estimated to be running into crores of rupees in the form of loss of Crackers put for sale for Diwali, Cash and kind of the stall owners, vehicles of stall owners as well as customers who were visiting the stalls in very large number were also burnt in the fire.

The administration had selected this open space keeping in possibility of such incidents.

Deputy commissioner Mr. V. Umashankar dared to reach the spot within minutes even in the face of possibility of public outrage. SP Mr. Vikas Arora also reached the spot to take charge of the situation. Although there was raising of slogans by the public against administrative failure, but both the senior officers along with City Magistrate, SDM and other officers did their best to control the situation.

The fire which had reportedly started off following the demonstration of a cracker by a seller, gutted all the stalls in no time in a chain reaction of explosives caught fire one after another.
Posted by GS Mann at 5:55 PM

hi
i am wazir randhawa from sydney in Australia belongs to village santnagar in sirsa. i glad from this news site. we are near about 10 families near about 50 persons from sirsa in sydney everday watching u r news by the internet
thank for keep in touch with sirsa