Regional parties have no future-Gautam 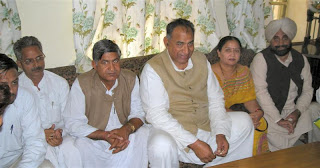 All pictures can be clicked to enlarge or right click to open link in new window.

[Watch Video NEWS at the Bottom of this NEWS]

Mr. Ram Kumar Guatam, BJP-MLA from Narnaul said that regional parties have no future in India and more so in Haryana.

He said that people have written off INLD totally in the last elections had not been internal bickering of the Congress the INLD would not have bagged more than a single seat in Haryana.

About Kuldeep Bishnoi’s proposed new regional party he said that the Bishnoi camp has a reputation of being highly unreliable and people of Haryana should not and perhaps won’t trust its promoters at all. He alleged that Mr. Kuldeep Bishnoi is talking of providing a corruption free Haryana, while his father was the very person who introduced corruption in Haryana.

He denied that BJP would have any alliance with any party in Haryana, and said that BJP shall go alone and win the Haryana electorate’s mandate in the next elections. He was accompanied by Mrs. Renu Sharma, Mr. Gurdev Rahi, and Mr. Jangra at a press conference held at Tula Ram Dharmshala.

A note about Sirsa NEWS: Web Videos (with Sound)
To watch the videos properly, you must have an Updated Windows XP/Vista OS with all the plug-ins, and preferably a fast broadband internet connection, for dial up or mobile connections press the Play button let the videos load, that may take from few to several minutes, then replay the whole audio/video uninterrupted.