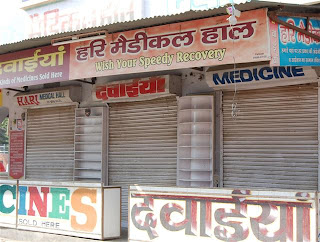 Stir of Chemists unabated
Strike enters into 4th Day.
Resentment amongst patients upon not getting medicine.
SIRSA NEWS
09 October, 2008
All pictures can be clicked to enlarge or right click to open link in new window. Picture Amit Soni

As the Sirsa Chemists strike entered its 4th day today, following a row with the Drug Control officers who raided and sealed the shops of 7 Sirsa based chemists, the Health services were badly affected and the patients were seen running from pillar to post for procuring emergency and life saving drugs. Only those chemists who have opened their shops within the premises of Private Nursing Homes were open and there were reports that they were charging exorbitant rates for even the common medicines. The stand off between the Sirsa Chemists and the Drug Control officials took a new turn on Tuesday when Madan Lal Bajaj the president of the Sirsa Chemists and Druggists Association forcibly broke open the seal of his own chemists shop which was sealed on Monday by a team of Drug control officials. It may be recalled that following numerous complaints that the Sirsa chemists were indulging in storing and selling spurious and addictive narcotic drugs to the gullible people a 15 member team of the Drug control Department had on Monday raided chemist shops at Sirsa and had sealed 2 drugs godowns and 7 shops. During the process some of the members of the team were not only manhandled and criminally intimidated but were also prevented from performing their official work and a criminal case was registered against some of the chemists. The city police on Monday on the basis of a complaint filed by Drugs Inspector Rajneesh Kumar registered another criminal case under sections 201,206,434 and 380 of the IPC against Madan Lal Bajaj for forcibly breaking the seals of his shop and also for stealing some medicines and documents from the shop. The Drug Control on getting information that Bajaj had broken the seal of his shop re-raided his shop and re-sealed his shop. brother Pawan Bajaj has been arrested. Meanwhile the Police arrested one of the Chemists named Pawan Kumar Bajaj who was later sent to Judicial custody for 14 days by a court on Tuesday.
Chemists shops remained closed in Kalanwali, Ellenabad and Dabwali as well to express solidarity with the Sirsa chemists.