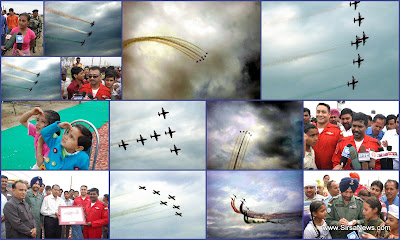 Surya Kiran Aerobatics Enthrall Citizens at Air Force Station Sirsa.
SIRSA NEWS
27 March, 2009
All pictures can be clicked to enlarge or right click to open link in new window. Pictures & Video: GS Mann
Despite inclement weather, the Surya Kiran Aerobatics Team (SKAT) Air Show was a runaway success at Air Force Station Sirsa. The show that could not be started at the scheduled time of 7:30Am as it started raining from the wee hours on 27th March, seemed to be announced postponement but the rains Gods also perhaps did not want to disappointment scores of children and equal number of adults accompanying them. The drizzle paused for a couple of hours and that was temptation enough for the well prepared Air Force and Surya Kiran Aerobatic Team (SKAT) to take to the air. To initiate the show Gp Capt. GS Bedi himself took off a MIG fighter for about 15 minutes in the air showing its majesty and Power to the stunned audience who were perhaps all there to witness just the Hal made Kiran MK-II aerobatics. The agile MIG warmed up the spectators as they had been waiting since morning in the cold wet windy weather in the open. Soon after the MIG landed the 6 Kiran MK-II planes, led by the team leader JT Kurien taxied towards the runway and took flight in serial order.
And there after their show in the air with tricolor smoke and formations that elated and enthralled everybody in such magnanimity that time seemed to have stopped for the duration the Red Kirans were airborne. The formations and all was a spectacle best viewed with naked eye but those who were not there the Sirsa News Web Video in this NEWS post and Sirsa News You Tube Channel may compensate a little! (Below)

Elite from the city, administration, judiciary, educationists, business, politics, farmers and the commoners were all together with their eyes towards the cloudy skies to gaze onto super stars of another kind, the Red Machines being tamed by trained Air Force pilots.

At the end of the show children, Gheroed, Gp. Capt. GS Bedi, JT Thomas and other red uniformed pilots for their autographs. The adults were seen commenting that it’s not just Film Stars and Sports stars who are sought by autograph seekers the men in uniform are also.
Click Here for Previous NEWS
Click Here For Sirsa News Web Video Channel To watch video Of SuryaKiran Aerobatics at Sirsa
Click here to watch Photo Slide Show of the event (Over 70 pictures)
Click here for Photo Album of the show (over 70 downloadable and printable picture)
Watch Sirsa News Web Video of the Aerobatics, also Interviews of Gp Capt. GS Bedi, Mr Jay Thomas (JT) Kurian, Mr Nanda:

You need have a broadband or better internet connection, and flash plugins on your OS to view this video properly. Click Here for Full Screen Version of this Video

Inputs from http://www.sirsanews.com/ How the color smoke is formed in such Aerobatic Planes:

The smoke trails left by the aerobatic aeroplanes are made by releasing diesel into the exhaust; this oxidises straight away, leaving a white smoke trail, Dyes are added to produce the different colours. The diesel is stored perhaps in the pod on the underside of the plane; originally designed to carry a cannon, it houses three tanks: 1 for pure diesel for white trail and two tanks of green- and red-dyed diesel. The smoke system uses about ten gallons per minute; therefore each plane can trail smoke for a total of several minutes.