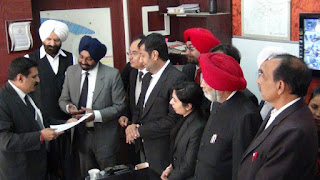 To
The Hon’ble Chief Minister,
Haryana.

It is to inform you that in continuation of earlier meetings under the banner of All Haryana Bar Associations, one of the meeting was held at Ambala on                  05-8-2017 under the president ship  of Sh.Rohit Jain ,President of District Bar Association Amabala, attended by most of the President, Secretary of District, Sub-Divisional and Tehsil  Bar Associations of Haryana and day to day problems /difficulties being faced by Advocate fraternity in Haryana were discussed and it was decided to seek appointment with the Hon’ble C.M. Haryana to submit memorandum but appointment has not been given so far ,therefore, memorandum of  demands could not be submitted and in further continuation of  meetings under the banner of All Haryana Bar Associations was held on 18-11-2017 at Hisar under the President ship of Sh. O.P. Kohli ,President District Bar Association Hisar and again discussed the problems /difficulties of Advocates /Associations and decided to submit memorandum of demands to the Hon’ble Chief Minister Haryana if, appointment is given otherwise to submit the same through Deputy Commissioner of each District on a single day.
We the Presidents of the Bar Associations of Haryana do hereby submit by way of memorandum the difficulties being faced by Bar Associations, lawyers and the litigants throughout the state.
(i)        Permission /Relaxation in forming the Group Housing Society for advocates at each District and Sub-Divisional Head Quarter and allotment of land for construction of houses.
That a ban is imposed by the State Govt on Formation of the Co-Operative Group Housing Society ,therefore, the Advocates are not able to Form Such a Society to acquire land for Housing Colony  for the Advocates.

That there is a long lasting demand of Housing colony for advocates of Haryana  as most of them are coming from far-away places to the Court and have to travel for long hours to come to the courts. This not only is tiresome but also affects the capability of Advocates. In Chandigarh and many other places land for Group Housing Societies of Advocates is being allotted to the Bar Associations. The state Government of Haryana should also provide appropriate land in every district to the bar associations for group housing of advocates. The Advocates also are ready to pay the collector rate of the land which will be allotted to them for the construction of housing colony.

(ii)       State Government to pay the electricity expenses of the Bar Association Complex, Meeting Hall,Library, Lounge ,Water Coolers,AC, Roads or streets leading to or in an around the Bar Complex.
Bar Associations regulate and control the facilities including the space for the comfortable sitting and meeting of the member-advocates. It also provides a platform to all those members to raise their collective grievance. The facilities of Bar is not only for the members of the Bar Association but also ensures the benefits of general litigant public who visit the Court premises in a large number on every working day in connection with their cases.

The Bar Complex, which includes Bar Rooms, Bar Library, Litigant Hall, office of the Bar Association and Bar Lounge are integral part of the Judicial Court Complex. The libraries are being used by the Advocates, Public Prosecutors and others to gain knowledge of law as such the State Govt. is responsible to maintain these facilities and electricity bills are also required to be paid by the State Govt. However at some places it is being paid but in most of the District it is not being paid by State Govt. and Bar Associations either shown defaulter in payment or their connections have been disconnected causing more problems for them.

(iii)-Providing Multi-Storey parking in all District Courts of Haryana for Advocates
Problem for parking of vehicles is being faced by Advocates, Litigants due to non availability of sufficient space for Parking. Number of vehicles coming in the courts is increasing day by day and due to limited space of parking the vehicles are not parked in a proper manner. This results traffic hazards and is also security threat for the Court Complex, therefore, to avoid unnecessary difficulties to the litigants and the advocates, it is need of hour that Multi storey Parking is to be constructed in all courts of Haryana for advocates.
It is humble request to the State Government to construct multi level parking in all the courts of Haryana for advocates.

That advocates have to attend different courts at different places and they are burdened with toll tax on this traveling directly causing loss to them and litigants and a lot of time is also wasted in this process and the burden on them is unnecessary as such advocates are requested to be exempted from payment of toll tax.

(v)       Payment of Stipend to New entrant / Junior Advocates by the State Government to the tune of Rs.10,000/- p.m.
While practicing as a lawyer, it takes a long period to establish name and to derive fruit-full success from the profession. Now a day’s new advocates find it very difficult to earn income from the profession in their early years of practice i.e. due to decrease in number of litigations and already presence of well experienced advocates in every court. The new entrants get discouraged and feel humiliated, so to uplift their spirit towards this nobel profession of advocate, the state government should provide a minimal amount of Stipend, so that the new Advocates can be financially stable and can continue their practice without any financial stress.
It is our humble demand to the State Government for providing Stipend to the new entrants so that they can be financially stable and can continue their practice without any financial stress.
(vi)       Establishment of training academy on the pattern of judicial academy.
That training academy for the new comer advocates at the expenses of State Govt. is requested to be established so as to prepare good attorneys, Judges , Advocates who can compete in all kinds of services and it will eliminate the problem of employment and earning for advocates and it shall refurbish  the profession and a landmark decision of Govt. of Haryana.
(vii)  Enhancing  Security of Court/Bar Complexes of the state.
In the last decade, Court complexes throughout state have witnessed many attacks on litigants, advocates and the witnesses. Due to these repeated incidents of attack, the judicial working is affected and these incidents are attack on the judicial system. Inspite of many efforts, the present security measures have proved failure. It is need of the hour that the security of the Courts throughout the state be enhanced by constructing secured fenced wall not only around the judicial complex but whole of the court complex including chamber complex. Police posts be also set up in the Complexes for immediate action and ensuring security to the judicial officers, advocates, staff of the courts, litigants and witnesses or any person present nearby.
It is humble demand to the State Government to provide proper security in and around the court complex.
(viii) Annual Grant of Rs.10,00,000/-to every Bar Association of Haryana for maintenance purposes.
That there is no other income to Bar Association except the monthly subscription from the member of the Bar which is not sufficient for maintenance of Bar Associations as such annual grant of Rs.10,00,000/- may please be allowed to every Bar Association for this purpose.
(ix)  Handing over of shops/Kiosk situated in the Judicial /Bar Complex to the Bar Associations.
That shops /Kiosk are situated in every complex rent of which is being collected by the deputy commissioner office of each District, these shops/Kiosk are requested to be handed over to the Bar Association which can be very helpful in upkeep and maintenance Bar Association.
(x)   Fixation of Minimum Experience of 3 to 5 years of practice for appointment /selection of Judges.
That for the last some time judges are being recruited directly coming from institution and lake of practice at Bar is counterproductive and public as well as advocates are suffering in dealing , behavior and decision of cases as such a minimum experience of 3 to 5 years may please be made a condition for selection of Judges/Judicial officers.
(xi) Appointment of Senior /Seasoned lawyers to various Commissions, Forums, Corporations and Tribunals.
That the Govt. while appointing president, Chairman  and members of commission , Forum , Corporation and tribunal is not considering Advocates and banking upon the retired Judges and Bureaucrats as such requested to consider the advocate for appointment on these posts.
(xii)-Transparency and enquiry in the appointment /selection of judicial officers.
That there is always talk of selection/appointment of judicial officer in shady manner but the present scenario has cleared the doubt in the minds of people that transparency in not there in the judicial appointments also as such CBI enquiry is requested to be ordered in the FIR no.194 dated 19-09-2017 under section P.C Act,1988 and IPC involving HCS Judicial recruitment so that people may know what is happening with them and who is coming with which way on the Judicial Dias.
(xiii) Payment of monthly allowance to the President, Secretary and other office Bearers of Bar Association on the pattern of Zila Parishad ,Panchayat Samittee, Panchayat ,Municipal Committee /Council.
That all the elected office bearers and members of above noted Associations are being paid monthly allowance attached to their office , we also request to follow this practice in case of the office bearer  of Bar Association also.
(xiv) Implementation of Advocate welfare Act 2001.
That advocate welfare act,2001 may kindly be implemented in letter in sprit.
It is, therefore, under the banner of All Haryana Bar Associations on behalf of Advocate fraternity of Haryana requests to your good self to accept and implement these demands in the interest of advocates/public of Haryana.

We shall feel Highly obliged
All Haryana Bar Associations