No Privatization of Govt. Polytechnics-Deputy Commissioner 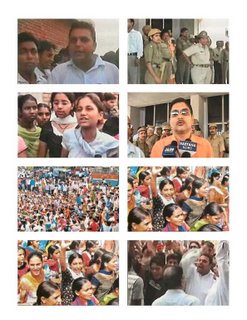 No Privatization of Govt. Polytechnics-Deputy Commissioner


SIRSA (SirsaNews)
Deputy Commissioner Sirsa Mr. V Umashankar, clarified that Ch Devilal Polytechnic College, Nathusari Chopta is not being privatized at all. Instead to streamline the education system and for development works, a 9 member education society has been formed under the chairman ship of Education Department’s Financial Commissioner and Chief Secretary Haryana.

The DC Said that this committee shall look into the mater of unfilled vacancies and shall fill the vacancies on ad-hoc basis only. These employees shall not be transferred to any other college. So as to confine them to institute they have applied for. The need to form such societies arose because many colleges situated in villages and remote areas had a large no. of vacancies, which were not getting filled up thus affecting the studies of students in these colleges.

Mr. V. Umashankar further made it clear that the ITI at Sirsa is also not being privatized in fact it is being upgraded to Center of Excellence, its one of the few ITI in state, that are being upgraded. The state Govt. shall be spending more than 60lacs rupees for it.

He appealed to students and youth not get misled by rumourmongers and false propaganda and instead pay attention to their studies.

Faculities and principals of GPS & GPW were seen pacifying the students. Mr. Sudhir Gilhotra Principal Govt. Polytechnic College Sirsa appealed to the students of his college to call off their agitation, as their apprehensions were baseless. There was no question of privatization and only ceratin youth leaders were spreading such gossip to garner youth strength behind them. Mr, Yashpal Beharwal also addressed media persons and informed about the facts.

With te efforts of college staff and SDM Ms. Geeta Bharti a large section of the students especially of GPS called off their agitation and resumed college like normal on Wednesday.

However students of GPW continued the stir and took out a procession to the Mini Secretariat complex on Wednesday to the SDM office. En-route the girl students also tried to put up a road blockade that was prevented by the Police.

The girl students were insisting on the SDM to furnish them a written clarification regarding privatization fee enhancements etc.
View Previous Posts of GPW
http://sirsanews.blogspot.com/2006/04/annual-function-2006-womens.html
Posted by GS Mann at 8:24 PM