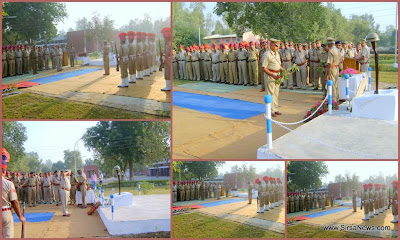 All pictures can be clicked to enlarge or right click to open link in new window. Pictures: Amit Soni

About Commemoration Day (A SirsaNews Special)
Soon after Independence, contingents of the CRPF were sent on Kutch, Rajasthan and Sindh borders to check infiltration and trans-border crimes. They were, subsequently, deployed on the Pakistan border in Jammu and Kashmir following attacks launched by the Pakistani infiltrators. The CRPF bore the brunt of the first Chinese attack on India at Hot Springs (Ladakh) on October 21, 1959. A small CRPF patrol was ambushed by the Chinese in which ten of its men made their supreme sacrifice for the country. Their martyrdom on October 21 is remembered throughout the country as the Police Commemoration Day every year.