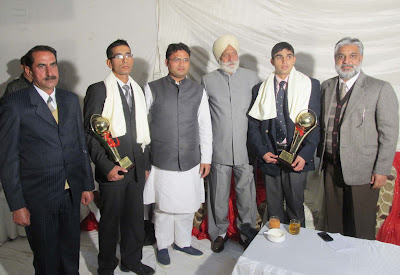 In a simple informal function Dr. Ashok Tanwar member of parliament from Sirsa felicitated Lt. Rajdeep Singh and Lt. Ankit Sihag on their being commissioned into Indian Army.
The two young officers are from Sirsa and have been commissioned into the Indian Army on the Passing-Out- Parade (POP) held on 10th December2011 at IMA Dehra Dun.

Speaking on the occasion, Dr Tanwar mentioned that he himself comes from Army back ground as his father was in Indian Army.

He congratulated the parents, Sh. Rajpal Singh and Dr. KC Sihag. Dr. Tanwar said that these two young officers are a matter of pride not just for Sirsa but for nation. They will also serve as role model and inspiration for other young students that if they work hard in the right direction than they can be successful purely on merit as well.

Both the young officers also briefly addressed the guests.

The over the dinner was attended by several dignitaries close to the parents of the Officers.Dr. Tanwar gave a memento and shawl each to both the officers.
Posted by GS Mann at 9:31 AM