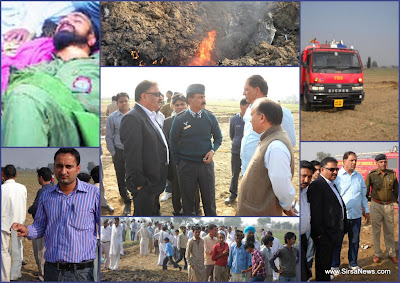 A MiG-21 combat aircraft of the Indian Air Force on Friday crashed near Mangalia village of Rania Mandi in Sirsa but the pilot managed to eject moments before the plane went down. The combat aircraft of AIF took off from Sirsa Air Force station base around 10am for its regular practise. The plane crashed around 1pm in the fields of Mangalia village. Air Force medical team led by SP Gupta, BK Patil and other AIF officials reached the spot and three Fire brigade engines were pressed into service to douse the burning flames coming out of plane.
District administration team led by Sirsa DC Sameer Pal Srow, SP Devinder Yadav rushed to the site with medical team and to take stock of the situation.
See Video Interviews of eye witness Prem Mehta, GROUP CAPT PS YADAV, C ADMO, AF SIRSA and other Visuals form the site of Crash.
Another plane took the injured Squadron leader Jagdeep Singh to the Air Force station and court of inquiry has been ordered in this regard. A team of AIF officials left Delhi for the accident site to know the reason of MiG 21 crash.  Sources revealed that the plane developed some technical snag and plane tail caught fire.
A report by JS Uppal Student Reporter Deptt of JMC CDLU, with inputs from Sat Singh, and GS Mann.
Posted by GS Mann at 7:11 PM