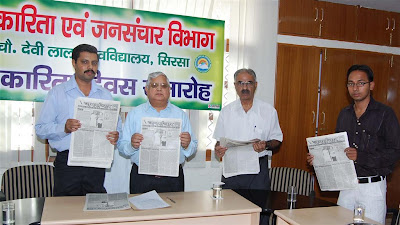 Sirsa, Journalism students of Chaudhary Devi Lal University, Sirsa celebrated Press Day on May 30th, in a unique manner by reaching out to the city residents to find out their opinion about the world of media. The findings of the survey along with comments of leading media-persons of the region were published in the inaugural issue of Jansanchaar, a four page laboratory- journal of the department. CDLU Vice Chancellor Dr. KC Bhardwaj released the first issue of Jansanchaar during the Press Day ceremony held in the university campus.

While Vice-Chancellor Dr. Bhardwaj was chief guest on this occasion, Virender Singh Chauhan, chairperson of the Department of Mass Communication presided over the ceremony. Addressing media persons and students of mass communication, the Vice Chancellor said media being forth pillar of the democratic setup must be provided full freedom in its job. He said the state of freedom of press in the country was far better than several counties on the globe. He said while freedom of press must be maintained at any cost, those who enjoyed this freedom must perform their duties in a responsible manner.
The Vice Chancellor also reminded the gathering of the great contribution of the journalists in India’s freedom struggle. Majority of our great freedom fighters including Mahatma Gandhi and Lokmanya Tilak were also journalists, he added. He congratulated the students and faculty members of the JMC department for bringing out Jansanchaar to commemorate Press Day and dedicating the same to the press day. He said the department was fast emerging as a centre of excellence in media education.
Virender Singh Chauhan, chairperson of the JMC department said the Hindi Patrakarita Diwas was celebrated every year on May 30 and it was on this day in 1926 that publication of India’s first Hindi newspaper ‘Udant Martand’ started. He said freedom of press was the first and foremost parameter that could be used the gauge the strength of any democratic setup. He said although the state freedom of press in India was far better than several developed countries, it was under constant threat from vested interests. He said in Haryana itself it had been challenged time and again. But fortunately the media fraternity in the state succeeded in thwarting these attacks and keeping the anti-democratic forces away from desecrating the sanctum sanctorum of its freedom.
Chauhan also gave details of the findings of the survey conducted by the students. He said the study conducted by the students showed that most of the respondents applauded the role being played by the media to unmask the corrupt people. At the same time majority of them expressed pain at the fact that the common man was no longer at the focus of the media. CDLU Registrar Dr. RK Sehgal, Dr. Rajkumar Salar, SK Vij and Vineet Chhabra were among those present on this occasion.

Sirsa: Construction work of the proposed Media Centre of the Department of Journalism and Mass Communication of Chaudhary Devi Lal University commenced on Sunday. RK Sehgal. Registrar CDLU and Virender Singh Chauhan, chairperson of the department performed Bhoomi Pujan prior to beginning of the work on the building

that would host all the media production activities of the department.The building would come up at a cost of Rs 78 lakhs. Notably, the foundation stone of the building was laid by Rohtak MP Deepender Hooda during his visit of the campus in January this year.
Speaking on the occasion, Registrar Dr. RK Sehgal said the JMC department of the varsity was fast emerging as a centre of excellence in media education. He said the department was first journalism department of Haryana to have started a news portal that was being used to train students in basics of journalism. The news ticker system launched by chief minister Bhupinder Singh Hooda last month was another initiative of the department that was received very well in the campus and the Sirsa city itself, he added. He hoped that the Media Centre would be ready for use within the stipulated time of five months and would prove to be a big infrastructural asset of the department.
Chairperson Virender Singh Chauhan said the first community radio station of the state would be set up in the two radio studios to be constructed in the Media Centre. He said as the department had already received a LOI from the Ministry of Information and Broadcasting, it was in the process of getting frequency allotted for the community radio station. He said in addition to the radio station, a modern television studio and a well equipped news room would be established in this building. Executive Engineer SK Vij said the Media Centre would have a plinth area of 7000 square feet and it would be fully air conditioned.
Both Reports, Courtesy: Department of Journalism & Mass Communication CDLU