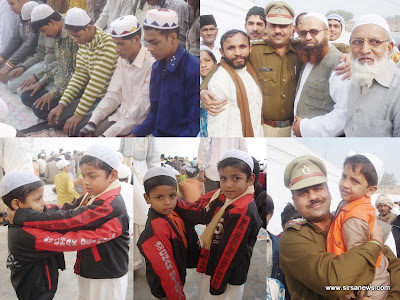 Id celebrated with religious fervour.
SIRSA NEWS
10 December, 2008
All pictures can be clicked to enlarge or right click to open link in new window. Pictures: Amit Soni(09215771825)
ID-UL-ZUHA was celebrated here today by the devout Muslims with great religious fervour and devotion. Over 2 thousand Muslims including children clad in new clothes led by Imam Hanif Qureshi thronged the local Id-Gah early in the morning and prayed for communal harmony and brotherhood and also offered Namaz. Many Hindus, Sikhs and Christian congratulated them on the occasion. SHO Ajay Sharma also greeted the Muslims on the ID.
A Note about Id-ul-Zuha:
Id-ul-Zuha (Bakr-Id)This Muslim festival of sacrifice, Id-ul-Zuha (Arabic) or Bakrid in India is celebrated all over the country. On this day Muslims sacrifice a goat or Bakr (Urdu) to commemorate the sacrifice of Prophet Ibrahim, who willingly agreed to kill his son at the behest of God. This festival coincides with the Haj pilgrimage in Mecca. Prayers are offered in the mosques and the sacrificial meat is then distributed after the Id prayers. Special delicacies are prepared and served among family and friends on the occasion.
Also called Bakrid, Id-ul-Zuha, is a festival of great rejoice. Special prayers and exchange of greetings and gifts marked the Id-ul-Zuha (Bakrid), the festival of sacrifice, celebrated with traditional fervour and gaiety in India.Id-ul-Zuha is a reminder of Prophet Ibrahim's readiness to sacrifice his son for God's sake. It also marks the completion of Haj (pilgrimage to Mecca). On this day, special `Dua' is recited by thousands of Muslims for peace and prosperity.
LegendsIt is a commemoration of Hazrat Ibrahim's great test of obedience to Allah, who ordered him to sacrifice the person dearest to him. Ibrahim decided to sacrifice his son Ismail, at Mina, near Mecca. As the great religious leader was on the point of applying the sword to the throat of his dear son, it was revealed to him that the exercise was merely a test of his faith in Allah, and that he could sacrifice a ram instead.
Rituals On Bakrid, the Muslims go to the mosques in the morning to offer prayers to Allah, and then sacrifice the animal at home. Bakr means 'sheep', and on Bakrid, the affluent sacrifice one animal per member of the family, and distribute two-thirds of the meat among the poor. A full-grown camel, cow, goat or sheep, free from any disease, is sacrificed. Bakrid is also a day for feasting and visiting friends to say Id Mubarak.
Report Dr OP Bansal, with inputs from GS Mann
Posted by GS Mann at 5:32 PM