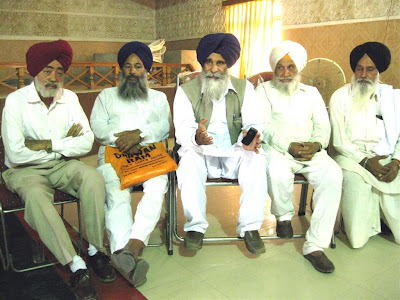 Addressing a press conference at in Sirsa Haryana Sikh Gurdwara Parbandhak Committee (HSGPC) (Adhoc) President Jagdish Singh Jhinda today accused Prime Minister Manmohan Singh of opposing the formation of separate SGPC in Haryana. PM Manmohan Singh is under undue influence of SGPC President Avtar Singh Makkar on the behest of Punjab Chief Minister Parkash Singh Badal. Mr. Jhinda, alleged that Makker being a relative of Manmohan Singh had been able to misguide PM that a separate SGPC for Haryana shall divide the Sikhs Religion while the fact is that a separate SGPC only means separation of management of Haryana Gurdwaras form that of . Despite repeated requests to the PMO for fixing a meeting with the PM to apprise him about the issues of Sikhs of Haryana, he had never been given an opportunity to see him personally, now he has written to the PM what he desired to apprise and discuss with him by meeting him personally.
Watch Video:HSGPC (Adhoc) President Jagdish Singh Jhinda's Interview

For Full Screen of this and other Videos Visit:
http://www.youtube.com/sirsanews

Mr Jhinda also mentioned the recent incident of yesterday when he was virtually pushed out of SGPC budget session at only because he wanted to raise the demand for 40% percent allocation of the total budget of more than Rs.500 crore for Haryana. As of today a meager amount of only Rs8 crores is set aside for Haryana which is grossly unfair. Jagdish Jhinda wants atleast Rs100 crore for Haryana Sikhs and Gurdwaras from this very year. Mr Jhinda said that Makker and his protégés feared that if he (Jhinda) was allowed to speak, then he shall expose several financial bunglings of the SGPC president in association with his other faithful members.

Mr. Jhinda welcomed the declaration of Punjabi as second language in Haryana by CM Mr. BS Hooda and said that now it was up to the Sikhs in particular and Punjabi community in general to take advantage of Punjabi’s new found status and start correspondence with Government offices in Punjabi so that the language flourishes. Mr. Jhinda believed that CM Haryana Mr. Hooda was serious for the formation of HSGPC but is waiting for a green signal from PMO.

Mr. Jhinda also highlighted and demanded that the age of eligibility of voters for SGPC elections should also be 18 years in tune with norms of national electorate, instead of the present eligibility age which is 21 yrs old.
Posted by GS Mann at 6:30 AM