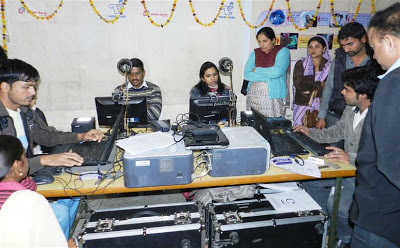 Aadhaar UID enrollment starts in SIRSA again.
SIRSA NEWS ( www.SirsaNews.com )
13 December 2012
Pictures and Videos: Amar Singh Jyani, GS Mann.
After a brief pause of few months, the project that was enthusiastically launched in 2010, Aaadhar UID cards enrollment has been started again in SIRSA. The re-introduction was done by DC Sirsa Dr J Ganesan and his wife Mrs Sangeeta Ganesan enrolling for UID at Bal Bhawan complex Sirsa today. The Aadhaar UID was pre-launched in 2009 for trials, then it was launched in 2010 formally, its enrolments came to Sirsa in the summer of 2011. After successful start it was suspended for some months, this writer was lucky to get enrolled on Aadhaar UID database as an early bird in July 2011.
Deputy Commissioner Sirsa has urged the public that it is important and useful everyone to get UID. Ganesan said all residents above the age of five can get their Aadhaar cards.
Ganesan said the Aadhaar card was an important document for every citizen as benefits under all government schemes, including subsidies, would be given through these cards. There is a very little chance of duplicity in this UID.
Posted by GS Mann at 9:57 PM