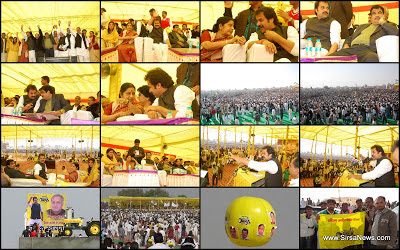 Note: if you have a high speed Internet connection, then you may Change Quality to 480p for high quality Video. (From Quality Gear Icon on right hand bottom corner of Video Window)

Kuldeep Bishnoi criticises Hooda and Congress rule and dares Chautala’s at their home turf.
Sushma and Nitin Gadkari announce that the alliance between HJC and BJP is permanent.
And declare that everything has been meticulously sorted before extending this alliance, If the alliance wins- Kuldeep Bishnoi shall be the CM this time, next time it may be turn of BJP. Seats of assembly to be shared as 45-45 (of Total=90) each, while for Lok Sabha it shall be 2-8 allocation for HJC-BJP for the 10LS seats.
Sushma Swaraj said: "Congress sarkar ka bhrashtachar hawa, zameen aur pataal tak hai”
She said the Congress-led UPA government had done corruption in the air by selling spectrum airwaves at throwaway prices, corruption on land through the Commonwealth Games and in the below the ground, through the coal blocks' allocation
An impressive crowd mostly by the efforts of HJC workers baffles both INLD and Congress.
Veerbhan Mehta applauded for his motivations to bring in supporters.
INLD supporters were keenly tracking the announcements of the alliance as they were hopeful if there are no serious or confirmed declarations then the BJP might be in thinking to go with the INLD, but a clear message by Sushma Swaraj on the alliance settled the dust on this speculation.
Mohinder Gupta, president Rashtriya Shakti Party, announced his party’s merger into HJC
Mange Ram Gupta from Jind, former parliamentary secretary Dura Ram from Fatehabad and former minister Ram Swaroop Rama from Ratia announced their decision to join the HJC. Recently retired from the post of Joint Director (Information, Public Relations & Cultural Affairs Department, Government of Haryana) Sh. Arun Johar also joined HJC today.
Posted by GS Mann at 8:32 PM