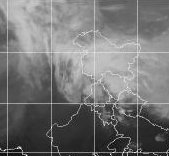 < Sat Kapana-1 Color
March 25, 2006
Late Night News
Hail storm and rain make havoc
Details:
March 26, 2006
Hail Storm and rain make havoc. Yesterday’s high temperature was murmured as a storm warning by many a people in gray beard. The speculation came true when suddenly in the evening rain with thundershowers at around 8PM changed into hailstorm. As you can see in the KALPANA-1 satellite pictures taken of skies over North India at about 10PM. The causative seems to be turbulence over North region.
The rain and the hails were not cheered by anyone, as they were havoc for all kinds of standing crops vegetables as well orchards. Especially the Mustard Crop ready for thrashing got damp hence delaying the thrashing on start. The wheat crop that earlier also got a cruel treatment from vagaries of weather got another bad blow. However from preliminary reports the hailstorms were not wide spread. The city SIRSA perhaps had the maximum of it.
Wheat Farmers are advised not to water their standing wheat crop till the weather clears up.
Posted by GS Mann at 3:59 PM