Leela Krishan Mehta is no more. 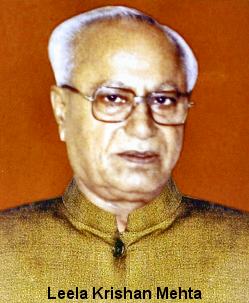 Leela Krishan Mehta is no more.

Former Nagar Sudhar Mandal Chairman and a close aide of late DPM Ch Devi Lal, Sh Leela Krishan Mehta (76) died yesterday night at PGIMS Rohtak. He was admitted at the PGI following a road accident in which he was hurt recently.

His funeral was attended by scores of people from city as well from the villages Mr Mehta had admirers. Mr Abhay Chautala from INLD as well as prominent leaders from Congress and other political and social bodies were present at his funeral at Shiv Puri SIRSA.

Born in 1929 Muradpur, Distt Multan West Punjab (now in Pakistan) in the family of Mehta Atma Ram. The family was allotted lands after the partition of 1947 at village Khuian, later in 1975 the family transferred its lands to village Humayun Khera of Tehsil Ellenabad, Sirsa. In early 60s Mr. Mehta settled in Sirsa for the sake of providing good education to his children. In Sirsa he started taking extensive interest in social, political and religious activities. He remained loyal and stood by Ch. Devi Lal throughout his association with him even during the tough days of emergency of 1975 to 1977.

Mr. Mehta was also president of Municipal Committee Sirsa in 1987.
Posted by GS Mann at 5:33 AM