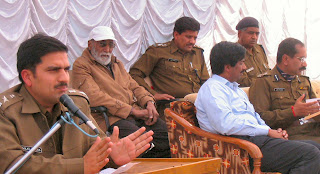 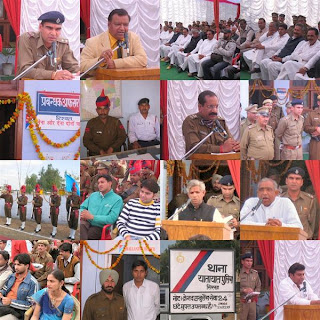 The Police Station has been manned by Mr. Manoj Verma SI who has been instrumental in carrying out the instructions of SP Mr. Vikas Arora in last few months in the process of improvement of enforcement of traffic rules in Sirsa.

Mr. Yashpal Singhal IG (Hisar Range) speaking on the occasion said that citizens should adopt and follow traffic rules on their own will and the police does not want to force it on the people instead the Police wants to educate the people about the necessity to follow traffic rules for their own safety as well the safety of fellow citizens. Mr. Singhal exhorted the press the social organizations and the police to reach out to towns, villages, schools and colleges to impart traffic rules education for safer roads. He advised to parents that they should dissuade themselves from allowing their wards to drive for their safety.

SP Sirsa Mr. Vikas Arora said that the fully computerized ‘challaning’ branch shall keep a data base of traffic offenders, a habitual offender who is challaned more than three times name shall be recommended for cancellation oh his or her driving license. This PS has also a Multimedia Traffic Rules education section, an educative video, and Power Point Presentation shall be compulsorily be shown to every traffic rules offender who comes here for compounding his offence. This shall help the offender to know about what is desired of him on the road. Every one else can also visit the Traffic Police Station to see the video. He also welcomed the citizens and press and media persons to enroll them selves as Traffic Marshal at this Police Station. Once enrolled the traffic marshal can witness the procedure of booking the traffic offenders, and the marshal can also help in imparting education to fellow citizens.