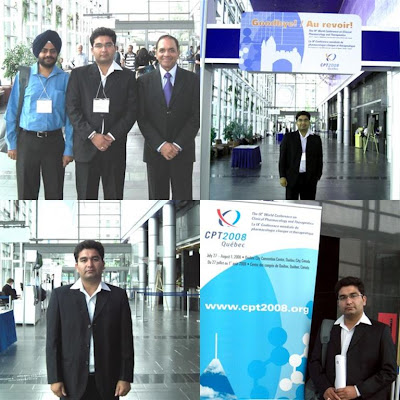 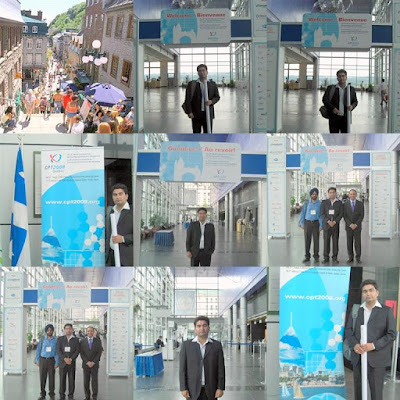 27 August, 2008
All pictures can be clicked to enlarge or right click to open link in new window
Mr. Sameer Dhingra, Chief Incharge, Haryana State Drug Information Centre and Asst. Prof. at Lord Shiva College of Pharmacy, Sirsa presented a research paper entitled “Attitude of Physicians towards Adverse Drug Reaction Reporting in North India” in the IX World Conference on Clinical Pharmacology and Therapeutics (CPT 2008) held on July 27- August 1, 2008 at Quebec city, Canada organized by the Canadian Society for Clinical Pharmacology (CSCP) and the National Research Council of Canada (NRC), under the auspices of the International Union of Basic and Clinical Pharmacology (IUPHAR). The conference was very much in line with the goal of promoting international sharing, cooperation and open discussions on the advances in drug research and utilization. In accordance with this goal, the scientific program was aimed at dealing with applied research relating to key issues governing progress in the field of Clinical Pharmacology and Therapeutics. The scientific program was divided into four different streams: new therapeutic approaches, from fundamental to clinical pharmacology, medicines and society and clinical pharmacology in special populations covering almost all the aspects of current and advance topics of clinical pharmacology and therapeutics which were attended by a large gathering of scientists from different parts of the world. His presentation was appreciated from all fronts and there was a fruitful interaction with the participants from various countries. A partial travel grant of $ 1000 CAD was provided by conference organizers on the basis of paper’s merit. The experience of interacting with international pharma specialists was scintillating, Mr. Sameer said.
Posted by GS Mann at 4:47 AM