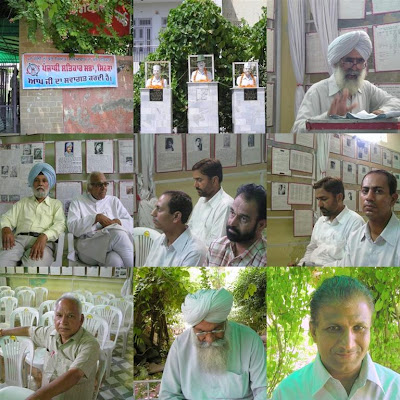 Also watch Sirsa NEWS Web Video in this Post below.

Comrade Narbhinder, the keynote speaker at the seminar said, that Sukhdev Thapar was a revolutionary who lived from 15th May 1907 to March 23, 1931). Mostly he is best known as an accomplice of Bhagat Singh and Shivaram Rajguru in the killing of a British police officer J.P. Saunders in 1928 in order to take revenge for the death of veteran leader Lala Lajpat Rai due to excessive police beating. But this portrayal of just an accomplice is quiet underrated; his role or sacrifice in no was anything less than Shaheed Bhagat Singh, Rajguru or his other contemporaries. He detailed how the strategies of Sukhdev were put to action by Bhagat Singh.

All three were hanged in Lahore Central Jail on March 23, 1931 in the evening at 7.33 pm against all norms of hanging. The dead bodies were secretly taken away by breaking the back walls of the jail and were seceretly burnt on the banks of River Satluj at Hussainiwala about 50 miles away from Lahore. The bodies were cut into pieces to make the burial quick.
Sirsa NEWS Video:You may have to wait for buffering on a slow net connection, press play once let the video play till end then replay for uninterrupted viewing.

To View this video properly, your PC Must have a fast internet connection(broadband), updated version of Windows XP or Vista with latest video, audio codecs and Flash Player application.

Sukhdev was an active member of the Hindustan Socialist Republican Association, being one of its most senior leaders. He is known to have started study circles at National College, (Lahore) in order to delve into India's past as well as to scrutinize the finer aspects of world revolutionary literature and the Russian Revolution. Along with Bhagat Singh, Comrade Ram Chandra and Bhagwati Charan Vohra, he started Naujawan Bharat Sabha at Lahore. The main aims of this organisation were to activate youth for freedom struggle, inculcate a rational scientific attitude, fight communalism and end the practice of untouchability. Sukhdev was deeply impressed by Pandit Ram Prasad Bismil, and Chandrashekhar Azad.

Sukhdev also participated in the 1929 Prison hunger strike to protest against the inhuman treatment of inmates.

His letter to Mahatma Gandhi written just prior to his hanging, protesting against the latter's disapproval of revolutionary tactics, throws light on the disparities between the two major schools of thought among Indian freedom fighters.

However, Hansraj Vohra - the man who gave the clinching testimony that resulted in the hanging of the trio, claimed that Sukhdev had himself turned an approver. Nevertheless, this relatively baseless contention does not detract from the tremendous courage, patriotism and self-sacrifice that Sukhdev Thapar embodifies.

More tributes should to be paid to Sukhdev for his contribution to the freedom struggle. And as for that traitor Vohra's allegation, they are nothing but trash. Thanks for sharing this.