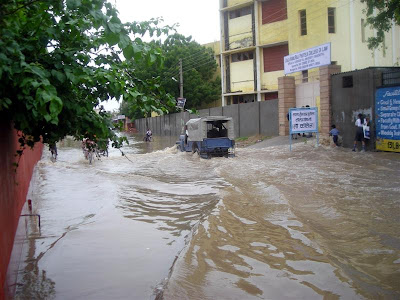 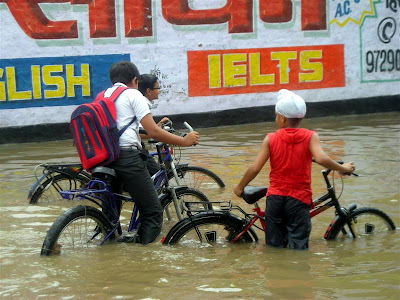 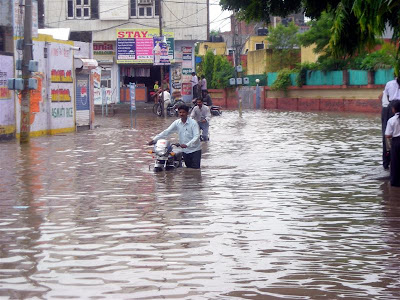 All pictures can be clicked to enlarge or right click to open link in new window. Pictures & Video: GS Mann Click for Video Here other Sirsa News Videos Here

Also see earlier posts of Rain Havoc in SIRSA dating back to 2006, nothing seems to have changed, whatever the administration claims to have done is all denied by these pictures.(view earlier pictures and compare with the latest one! A video is also there) To further the chaos all the city roads are now doted with potholes some are as deep as 2 feet, open and broken manholes are earmarked by citizens to prevent persons and vehicles falling into them.

All tall claims of the district administration regarding its preparedness to control storm water stood fully exposed when 2 hours of rain today left Sirsa town badly flooded. Vehicular traffic on various roads came to a halt and many scooters and motorcycles went out of order. In some of the localities like Hisaria Bazaar, PNB street, B –Block etc. rainwater entered houses and shops by regurgitation through the Sewers. Most of the bazaars are still from under Knee deep to hip deep of water even after several hours of the cessation of the rains. The worst hit areas are: B-Block including the CMK college road, GRG school road, Hisar road, Shiv chowk, Inderpuri Mohalla, Govt. Senior School road, Anaj Msndi, Surat garhia Bazar, Ghanta Ghar chowk, Agarsain Mohalla, old court road, Gol diggi chowk and Kirtinagar Mohalla etc, where the residents remained confined to their houses.

A SMALL girl named Pooja (5) was reportedly buried under the debris when a wall of her house in village Mehna Khera under Dabwali Sadar Police station suddenly collapsed due to rains on Thursday. The reports said that the victim had out of her house for some work during rains when the wall collapsed. The victim died on the spot without any medical aid. On getting information Tehsildar Dabwali rushed to the spot to assess the situation. On the request of the village Panchayat the body was handed over to her kin for last rites without autopsy.

Bindu Chaudhary and Ashish Khurana stood first and second in 2nd year LL.B examination conducted by the CDLU this year by securing 1111 and 1050 marks out of 1800 respectively. Both have attributed their success to their teachers and guardians.

AT A meeting of Sikh leaders held under the president ship of Baghel Singh in Gurudwara Wishvkarma in Dabwali on Thursday which was attended among others by SGPC members Jagdev Singh Shivraj Singh, Balkaran Singh, Gurjit Singha and Santokh Singh Rahi, the Haryana government was criticized for its failure to arrest the alleged killers of a Sikh youth Harmiander Singh on July 18 during the Dera followers and Sikh clashes. Baghel Singh demanded an immediate ban on the Dera Sacha Sauda daily ‘Sach Kahoon’ for allegedly propagating hatred among various sections of society and vitiating the peaceful atmosphere in the region. On the occasion a brother of the killed youth rejected the offer of ex. gratia of Rs. 2 lakhs made by the Haryana Government and instead demanded immediate arrest of his brother’s killers.
Reports: Dr OP Bansal & GS Mann
Posted by GS Mann at 7:17 PM