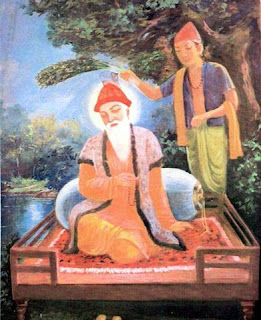 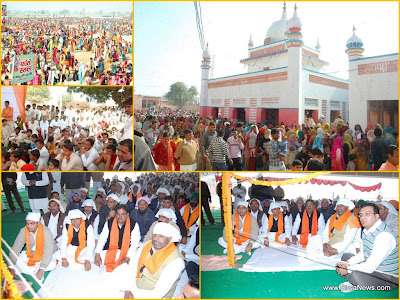 Mela Baba Bhuman Shah was celebrated with large number of devotees attending from all regions with great religious fervor today at village Sangar Sadhaan near Sirsa.

Baba Bhumman Shah, (born Bhumia Hassa) is counted among the top Udasi saints of . He was born on April 14, 1687 CE at Behlolpur village , Deepalpur Tehsil, Montgomery District, Punjab (), in a family reportedly coming of Kamboj lineage. His father Chaudhury Hassa Ram was a Numbardar and a well-known landlord of Behlolpur. Hassa Ram and his wife Mata Rajo Bai were known to be deeply religious and devotees of Guru Nanak as well as of Baba Sri Chand, the founder of the Udasi Panth. There are several legends and myths connected with Bhumia's early childhood. The story goes that once as a kid, when he was sleeping in his cradle, a cobra came and sat over his chest with his hood spread wide-apart. Mother Rajo was stunned at the scene but as she dared to approach the cradle, the cobra disappeared slowly with no harm to the sleeping kid. Another myth relates to the revival of the dead sparrows; and yet another one deals with restoring to health the lost crops of a poor farmer......so forth and so on. These were taken to be miracles and the peoples from far and wide started to crowd at Bhumia house to have his darshan.

Bhumia went for his schooling at the age of seven. He was very sharp and intelligent student and imbibed the essentials of Hinduism, Sikhism and Islam at a very young age. Besides attending to his religious lessons, Bhumia also performed the worldly chores like grazing cows in the company of other boys of his village. He would take his cows to the forest where he would also carry plenty of food and Jal (water) to run a free-kitchen (Langar) for the passers-by including the ascetics, saints, the poor and the orphans.

Little later, the family would move from Behlolpur to Deepalpur. By the age of fifteen, Bhumia had developed a strong aspiration to become a monk. With the permission of his parents he approached Baba Pritam Das of Pakpattan, the prominent Saint of Udasin Panth who initiated him into a Guru-mantra. On being formally initiated and baptized by Baba Pritam Dass, Bhumia himself became Baba Bhumman Shah. Soon afterwards, he started to preach the religious messages which were always accompanied by Kirtan and free-kitchen (Langar).

It is stated that Chaudhury Lakha Wattu, a Muslim landlord of village Kutub Kot had been arrested for some reasons and was put behind the bars at by the orders of the Governor of Punjab. Bibi Bakhtawar, Lakha's mother, was a staunch devotee of the Baba. She solicited Baba's blessings for the release of her son and it so happened that Chaudhury Lakha was released from the jail within couple of days. As a result, Lakha and his numerous Muslim relatives from the Wattu tribe also became devoted followers of the Baba. In addition, the tribe also surrendered a village named Kutub-Kot to the Baba which the latter made the centre of his religious activities. Baba Bhumman Shah travelled from village to village to preach his message of love, peaceful coexistence, universal brotherhood, religious-tolerance and equality. He had followers from many denominations including Hindus, Sikhs and Muslems.

Baba also visited the Dargah of Sufi Saint Baba Farid, at , and numerous other Sikh and Hindu shrines during his religious itineraries. At village Kutub-Kot, which later became renowned as Dera Baba Bhumman Shah, Baba permanently established the maryada of Kirtan and free kitchen (Langar).

Baba was also a very dedicated Sikh of Guru Gobind Singh. It is told that once, Dashmesh Guru and his Sikh followers were going to Nili Bar when they visited Baba Bhumman Shah and took Langar at the Dera; pleased with Shah's noble mission, Gobind Singh blessed him that his Langar would continue to grow with no shortage of any kind.

Corrections to the above information are welcome-Editor

The Above about Baba Bhuman Shah is sourced from various websites