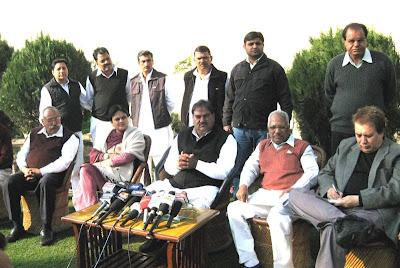 Abhay Singh Chautala newly sworn in MLA of Ellenabad stated at a press conference held at his NH10 Sirsa residence that the reason behind low margin in this election is because Congress reached its lowest ebb of morality and freely distributed cash and kind to woo the poor and gullible voters to vote for Congress. He said that though Dera Sacha Sauda had cleared advised the voters to vote with their own wisdom and to vote for a nice clean person, yet the Congress even tried to bluff the Dera disciples with rumours that Dera Chief wants them to vote for Congress. But the electorate was wise enough and showed a humiliating defeat to Congress.

Now the Congress Government has no moral right left to continue in power in Haryana and should seek fresh mandate.

Now the Congress Government has no moral right left to continue in power in Haryana and should seek a fresh mandate.

On 5th February the INLD shall put up a stir in all the 90 constituencies of Haryana against price rise and against the deteriorating Law and Order situation in the state. If the Congress Government did nothing about it then on 15th February INLD shall stage a BANDH at Distt. level in SIRSA.

Later Sh Abhay Singh Chautala toured the villeges on Sirsa-Ellenabad road to thank the electorate. Video of PC and Public Meeting in one of the villages below.