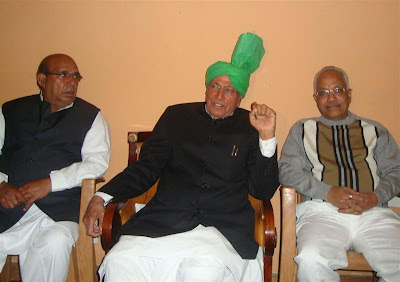 Chautala Files defamation case against a journalist and other news.

O.P. Chautala a former chief Minister and INLD supreme filed a defamation case under section 500 etc. of the IPC against Avinash Chopra the editor in chief of the Punjab Kesri Delhi for allegedly publishing some objectionable articles in his paper during the last elections in the local CJM’s court. The court has posted the case for January 04. for recording preliminary evidence.

Before that speaking at a press conference at his Barnala Road residence, Ex CM OP Chautala criticized Congress governments at the Center as well in Haryana on corruption issues, not forming JPC, much hyped Land acquisition policy of Haryana which he said was to benefit corporate and other anti people policies.

For Full Screen of this and other Videos Visit: http://www.youtube.com/sirsanews

Sh Chautala also said that the much accolades that Haryana sportspersons brought to the country were the result of sports policies introduced by Haryana Govt, when INLD was the ruling party.

THE Sirsa police with the help and assistance of Rajasthan Police today recovered a child who was kidnapped from Hanuman Garh Junction on November 27. The victim Himanshoo (4) son of Vinod Kashyap was suddenly found missing from his

House. After sometime some one telephoned Kashyap that his son has been kidnapped and demanded ransom for his release. Kashyat immediately informed the police which swung into action. ultimately the kidnapper informed victim’s father yesterday that he should come along with ransom money at Sirsa city Bus stand. A joint police team of Rajasthan and Sirsa police led by Amit Beniwal SHO Crime branch Sirsa laid a trap and caught the kidnapper along with the kidnapped Child. The child was handed over to his parents. The police has not yet revealed the name of the arrested accused as his accomplices are still to be nabbed.

A sum of Rs80,000/- was robbed from employees of Baba Ramdev Petrol Care by three armed persons during the wee hours of night between 5th and 6th December from NH10. The police has registered a FIR.

THEFT IN 4 SHOPS in CITY

Thieves broke into at least 4 shops in the main city and decamped with whatever they could lay there hands, this included cash, jewellery, silver coins and even grocery items from a Kiryana shop, Khal Binola Shop and the shop of jewelers shop of Pankaj Sarraf, the city police has started investigation.
Posted by GS Mann at 7:40 PM