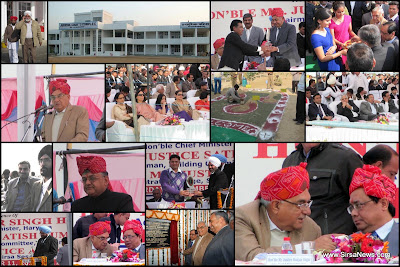 THE newly built Judicial Court Complex at Ellenabad was inaugurated today by Hon’ble Mr. Justice Ranjan Gogoi senior more justice of and Haryana High court in the presence of Mr. BS Hooda, Chief Minister Haryana. Speaking at the occasion Justice Gogoi said that it was important to bring justice closer to the litigants, he also impressed upon the Advocate fraternity to help in speeding up of the decision process of the cases.

For Full Screen of this and other Videos Visit: http://www.youtube.com/sirsanews

CM Haryana Mr. BS Hooda said that he himself had been a practicing lawyer, so he understood the need of setting up of judicial complexes in the state, and so far out of 21 districts, Judicial complexes have already been established in 19 districts, while construction of new Judicial complexes of Palwal and Mewat districts shall begin soon. A large budget has been allocated for this and already since 2005 more than 200 crore rupees have been spent in developing judicial complexes. Mr Hooda announced a grant of Rs10 Lacs from the CM funds for Bar Room, Library, Computers and other needs at the New Court Complex. Dr. Ashok Tanwar MP Sirsa, said that we are at the crossroads, and it’s high time for self introspection by the Executive, the Legislature, the Judiciary and the Media, as scams like 2G spectrum and others such have spared non of these. Dr Ashok Tanwar MP also announced Rs5Lacs for the Ellenabad bar from MPLAD funds.