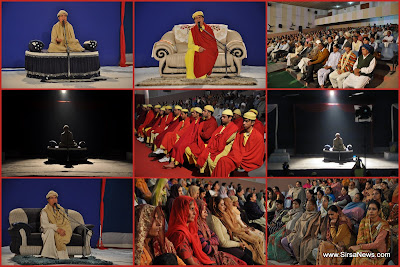 Pictures (Above) and video footage (Below) of Vishvas meditation retreat free camp organized by Vishvas foundation at CMK College auditorium from Nov 23rd to Nov 25th 2010. Details about the introductory discourse below the Video
Watch Video: Vishvas Meditation Retreat Camp at SIRSA Glimpses of 23rd Dec 2010
For Full Screen of this and other Videos Visit: http://www.youtube.com/sirsanews
Click here to Read related NEWS

In his introductory discourse on the morning of 23rd November, Swami Vishvas explained that unlike common perception meditation is altogether different from concentration. In concentration you are doing something while in meditation it’s the inverse, it is about non-doing, hence non-doing can somehow be analogous to meditation, but it is not so simple to train your brain to go into non-doing mode, even while a person believes that he is not doing anything the fact remains that his or her mind is in doing mode and is processing large data even without the knowledge of the person. Meditation is about giving the mind some break and shift it to non-doing mode. This technique once learnt becomes easy to follow, but in the beginning it has to be learnt.

Disclaimer: The above succinct is what this reporter could comprehend from the introductory discourse of the Swami, this may not be true interpretation of what Swami Vishvas was trying to imbibe in the audience, kindly check with his followers to know more about it.
Posted by GS Mann at 3:33 AM