SIRSA NEWS ( www.SirsaNews.com )
20 February, 2014
Pictures from: TV Grabs, Google MAPS
Orders prohibiting assembly of five or more people and carrying weapons were imposed under Section 144 of the CrPC in Sirsa town on Thursday, following violent clashes between two communities late on Wednesday night.
In the clash said to be between members of the Ravidasiya community and Shorger community late in the evening of Wednesday, over several people were injured. The clash took place around 9 pm on Wednesday after a poster of Guru Ravidas on Ravidas Mandir situated near Baba Bihari Samadh & Gurudwara Chilla Sahib was found torn. 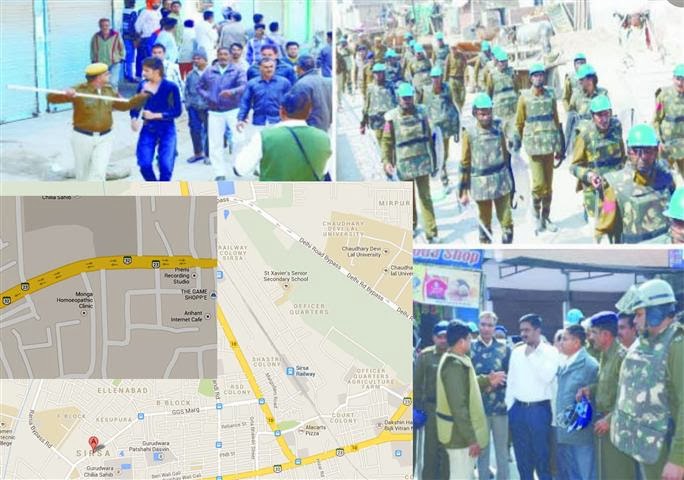 Heated arguments between the two communities lead to pelting each other with stones and exchanging blows of batons. Police teams reached the spot and controlled the situation from getting out of hands.
On Thursday morning, police officials called the representatives of both the communities for talks. However, members of both the communities clashed again. The POLICE had to resort to light force and Cane Charge to disperse the hooligans on the streets. Deputy Commissioner Dr . J. Ganesan and SSP Saurabh Singh took stock of the situation. Market on the road remained closed today
"Situation is now under control. Police teams, along with CRPF personnel called from Hisar and Fatehabad, have been deployed on Rania Road and several other parts of the city," SSP Saurabh Singh said.
The police have arrested several persons from both the sides and cases of rioting and hurting religious sentiments have been registered.
When a police Gypsy went to take some youths from both sides to the police station, the violence erupted again.
Suddenly, some abusive language used by a youth triggered the clash and soon the situation worsened with both sides hurling stones at each other and it was free for all for the next almost three hours.
Later, Deputy Commissioner J Ganesan and Senior Superintendent of Police Saurabh Singh went to the site and took control of the situation with the help of a heavy police force.
The road was blocked from both sides and the police organised a flag march in the area. Saurabh Singh said a peace committee of local residents was formed and the two sides had promised to sink differences.
The situation was widely under control by 3.00PM.