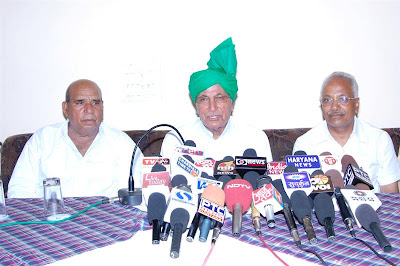 Leaving of Sampat and his ilk won’t make any difference to party. - Om Parkash Chautala, Ex CM Haryana.
SIRSA NEWS
15 July, 2009
All pictures can be clicked to enlarge or right click to open link in new window. Pictures: Amit Soni/Pankaj Dhingra
Also see Video at the end of this NEWS and also on YouTube Channel of SirsaNews
In a press conference held today at hotel Jai Villas Sirsa, Mr. Om Parkash Chautala former CM Haryana and Indian National Lok Dal (INLD) supreme said that leaving of INLD by Prof. Sampat Singh and his Ilk won’t make any difference to the party, INLD shall induct more good people into the party he added. Dismissing the charges by Sampat Singh, Mr. Chautala said that it was wrong on his part to blame me or the party of not giving him proper place or respect in the party, in fact he (Mr. Sampat) held important ministerial portfolio whenever INLD was in power. Mr. Chautala said that there was no dearth of good and dedicated people in the party, and the party is ready to face the elections anytime. He also blamed that in the last elections EVMs were rigged and may be the EC had connived the tempering on the behest of the Congress party, otherwise The Congress would never had won in Haryana.
Mr. Chautala also refuted the claim of Mr. Sampat Singh that he (Sampat) was the real choice of Ch Devi Lal as his political heir to the party.

Mr. Chautala also mentioned that those who left the party earlier, do not figure anywhere on the political map now, so much so that they could not even become a Panch after leaving INLD. He was referring to Chand Ram, Hukam Singh, Kirpa Ram Punia etc.