A Day to Remember - By Col. RD Singh

A Day to Remember - By Col. RD Singh
SIRSA NEWS ( www.SirsaNews.com )
31 December, 2013
Pictures and Videos: Amar Singh Jyani, GS Mann, Background Music: Murari Verma.
A Day to Remember -  Swearing-in  Ceremony  of  Kejriwal
I am so happy that I attended the swearing- in ceremony of Arvind Kejriwal at the Ramlila Maidan on 28 December, as the new CM of Delhi. Otherwise, I would have never witnessed over one lac people, donning the AAP cap, and beaming with  with joy , “ Ham jeet gaye yaro”. The common man has finally arrived. 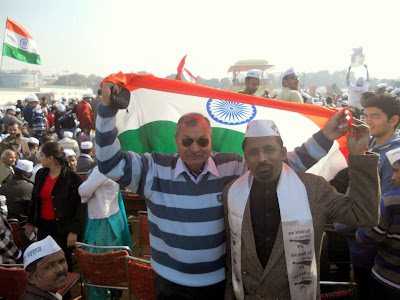 I reached the Ramlila Maidan at  around 10 am, and found people pouring in by hundreds.  You could hardly find an empty chair. There was a natural joy in people, as if it was a fair. Every one seemed to be  part of the victory. Waving the National  flag, singing patriotic songs, proudly lifting brooms ( party symbol), some even had decorated brooms like bouquets, and many supported  mini brooms in their AAP caps. It was a festive feeling, never seen before in politics.  I could see many young boys and girls with their cheeks painted with the ‘tiranga’, and many carrying placards , emphasising nationalism and honesty in politics.
I asked Shri Ramesh Chand, an enthusiastic AAP volunteer  sitting next to me,  that what if re-elections were held. He confidently replied, “Sir, we would have got a clear majority. And if the Congress makes our govt fall now, we will get 58 seats in the re-election”. That sentiment was echoed by many others whom I talked to. Such is the change in the conviction and thinking of people. They feel that bad days of democracy are over, and  good days are ahead.
Suddenly, I find people in front of me getting up, and I hear them say, “Oh, there is Kejriwal’s mother, sitting with aam admi”. People were also thrilled  that Kejriwal,  ministers,  and MLAs were travelling by metro to the venue. It was such a sound message to every one that , henceforth, no VIP culture, no frills, only service to people.  It was now 11 am, and there was hardly any space in the ground even to stand. The volunteers ( I won’t call them a crowd) had come from various parts of the country, and not from Delhi alone. The major difference was that , this time they had come on their own, and not brought by force or inducement . Despite such a huge sea of volunteers, there was order, discipline and a feeling of oneness.
Here comes Kejriwal, with his team of ministers, and he jubilantly  waves to over a lac  people in front of him.  The atmosphere is electrified as if the  Messiah  of the common man has arrived. There is huge clapping and slogan shouting “ Kejriwal zindabad. Intquilab zindabad. Bharat Mata ki jay -----“. The swearing in ceremony by the Lieut Governor commences  dot  at 1200 h. Kejriwal takes the oath with conviction, clearly and  loudly. So do his  ministers, with no mistake. Oath ceremony over, now the new CM addresses his people and assures them, “ It is not my govt but your govt. It is not me,  the bureaucrats,  or few policemen who will run it, but  the govt will be run involving one and half crore people of  Delhi.  We are here to serve you and not vice versa”. He is convincing and sounds absolutely genuine.
The function ends on a high note, and people disperse with a sense of achievement. The mood of  people is very upbeat, and they want to spread the success of AAP across the country. The intention is noble, and there is fire in the belly. Who can stop it, and why?