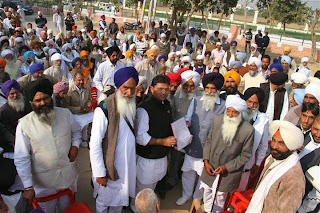 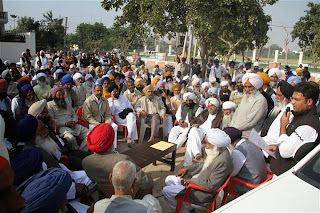 
Note: if you have a high speed Internet connection, then you may Change Quality to 360p/480p or higher for better quality Video. (From Quality Gear Icon on right hand bottom corner of Video Window)
A detailed memorandum of demands was also given to Dr Ashok Tanwar regarding this, the draft of the Memorandum is as below:

Honourable Sir,
The Re-org. Act 1966 (Art. 72) state as under:
72. General provisions as to statutory corporation.
(1)  Save as otherwise expressly provided by the foregoing provisions of this part, where anybody corporate constituted under a Central Act, State Act or provincial Act For the existing State of Punjab or any part there of serves the needs of the successor states or has, by virtue of the provisions of  Part II. Become an interstate lonely corporate then, the body corporate shall on and from the appointed day, continue to function and operate in those areas in respect of which it was functioning and operating immediately before that day, subject to such directions as may from time to time be issued by the Central Government, Until other provision to made by law in respect of the said body corporate.
(2) Any direction issued by the central Government under sub section (1) in respect of any such body corporate may include a direction that any law by which the said body corporate is governed shall in its application to that body corporate; have effect subject to such exceptions and modifications as may be specified in the direction.
(3) For the removal of doubt it is hereby declared that the provisions of the section shall apply also to the Punjab University constituted under the Punjab University Act, 1947 the Punjab Agricultural University constituted under the Punjab Agricultural University Act, 1961 and the Board constituted under the provision of Part III of the Sikh Gurdwara Act, 1925.
Haryana Govt. got disaffiliated their colleges from Punjab University on the same very day and got affiliated to Kurukshetra University. Haryana Agriculture University was established in 1970. Nothing was done by Haryana Govt. for the Sikh Gurudwara Act 1925 which was also a part of this Article.
Few words for Gurudwara Act 1925.
Gurdwara Act was passed by Punjab Assembly in 1925, signed by the Governor of Punjab not by Viceroy of India. So its jurisdiction was only the State of Punjab. In 1947, Punjab was bifurcated into East and west Punjab. The Gurdwara Act stood only for east Punjab. In 1956 PEPSU was merged in Punjab so the jurisdiction of this Act automatically extended up to Delhi. In 1966, Punjab was re-organised as this Act was meant only for Punjab. So to keep Haryana, Chandigarh and part of Himachal under this Act is unfair, unjust, unethical and also against the democratic norms of the country.

1.    This Act is meant for Punjab only. It is also clear from the fact that the members of Gurudwara Judicial Commission are appointed by Chief Minister of Punjab without any consultation with the Chief Minister of Haryana, Himachal and the administrator of Chandigarh.
2.    All India Congress Committee (AICC) promised the Haryana Sikhs as per their manifesto published in 2005 for Haryana Assembly Election that Congress if comes in Power will get implemented The Punjab Re organisation act section 72(iii) in totality. On this promise made by AICC, The Sikhs of Haryana voted twice in favour of Congress in Assembly and Parliament elections after 1984 episode for the 1st time, but the promise made by the AICC still remain to be fulfilled.
3.    In 2006, Haryana Govt. constituted a committee for consideration of a separate Gurdwara Board for Sikhs in Haryana, under the chairmanship of Sh Harmohinder Singh Chatha the then speaker Haryana Vidhan Sabha. He invited the views of Sikhs of Haryana in the form of affidavits in favour or against the formation of a separate Gurdwara board. Not even a single Sikh went against the formation of a separate board. The Chatha committee recommended the formation of a separate Gurdwara board in Haryana.
4.    On 7th March, 2008, a discussion was held on a motion moved by Sh. Nirmal Singh MLA regarding the formation of a separate Gurdwara board in Haryana, all the MLAs present in the house numbering 73 favoured the formation of the Board, not even a single MLA from any party opposed it.
5.    If all the other states in India like, Maharashtra, Bihar, Delhi have their separate Gurdwara board than why not Haryana.
It is very unfortunate that when Punjab reorganization act, views of Sikhs in Haryana and opinion of the elected representatives of Haryana is in favour of the separate Gurdwara Board in Haryana, then we fail to understand that why the Haryana Govt. is bent upon to deprive the Sikhs of Haryana of their legitimate right for Separate Gurdwara Board.
Your esteemed personality is very humbly requested to use your influence on the Haryana Govt. to implement the Punjab Re-organization act (Art. 72) in totality, so that the promise made in the manifesto stand implemented.

Thanking you in anticipation